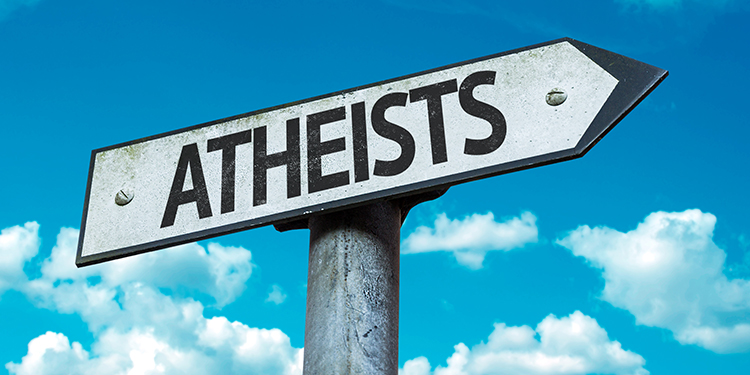 Can Atheists Justify Being Good Without God?

There is a new atheist’s ad out with a picture of Santa Claus and the words: “Why believe in a god? Just be good for goodness sake.” This is clever, but is it possible? Let’s analyze it more carefully.

First, if there is no Moral Law Giver (God), then how can there be a moral law that prescribes: “Be good.” Every prescription has a prescriber, and this is a moral prescription.

Second, what does “good” mean? How is good to be defined? If it can mean anything for anyone, then it means nothing for anyone. It is total relativism. Being “good” for some (like Nazis) can mean killing Jews. But for Jews it is evil. Hence, on this view there is no objective difference between good and evil.

Third, what does “goodness” itself mean in the atheist slogan. Being good “for goodness sake” implies that something is just plain good in itself. That is, it is an ultimate goodness. But this by definition is what Christians mean by God. Everything else has goodness, but only God (the Ultimate) is goodness. In this case, the atheist is using “goodness” as a surrogate or substitute for God.

This maneuver is not uncommon for atheists. Before the Big Bang evidence, atheists were fond of doing this with the word ”universe.” It was supposed to be eternal and, hence, needed no Cause since only what begins needs a Beginner. Carl Sagan employed the term “Cosmos” as a God-substitute. He said, “The COSMOS is everything that ever was, is, or will be.” It sounds a little like what Psalm 90 declares: “From everlasting to everlasting, thou art God.” Bertrand Russell attempted the same tactic in his famous BBC debate with Father Copleston. When asked what caused the universe, he replied that nothing did. It was just “there.” But how does an eternal, uncaused universe from which everything else came to be differ from an Uncaused Cause (God)?

However, in the light of the Big Bang evidence that the universe had a beginning, these answers lack scientific support. As agnostic Jastrow put it, “The scientist’s pursuit of the past ends in the moment of creation.” And “This is an exceedingly strange development, unexpected by all but theologians. They have always accepted the word of the Bible: ‘In the beginning God created the heaven and the earth’” (God and the Astronomers, 115).

Fourth, Dembski and Wells give another objection in recent book (How to be an Intellectually Fulfilled Atheist (or not), 115): “Atheism is a belief with scientific pretensions but no scientific backing.” It has no scientific backing for believing in an eternal universe, The Second Law of Thermodynamics still holds. The universe is running out of useable energy and, therefore, cannot be eternal. And it has no scientific backing for the spontaneous origin of first life. Again, as Dembski notes, “Until science can show that physical process operating under realistic prebiotic conditions can bring about full-fledged cells from nonliving material, intellectual fulfillment remains an atheistic pipedream” (ibid.).

Fifth, the truth is that many of the great atheists themselves understood well that without God there is no basis for being good for goodness sake. The famous French atheist, Jean Paul Sartre said, without God, “I was like a man who’s lost his shadow. And there was nothing left in heaven, not right or wrong, nor anyone to give me orders” (The Flies, Act III). Nietzsche said that when God died (see the “Madman” in Gay Science), then all objective values died with Him. And a subjective understanding of goodness to which everyone can assign their own relative meaning, is not goodness at all–let alone being goodness for goodness sake.

Sixth, atheists fail to make an important distinction. One can be good (as many atheists are) without believing in God. But one cannot be good without there being a God. That is, they can believe in a moral law (and live accordingly) without believing in God. But they cannot justify this belief without reference to a Moral Law Giver (God). This leads to one last observation.

Seventh, the fact is, that you cannot have an objective moral law without a Moral Law Giver. But atheists are the first to insist there must be a moral law–otherwise, how can they mount their argument against God from the injustices in this world. C. S. Lewis said this clearly when he wrote, “[As an atheist] my argument against God was that the universe seemed so cruel and unjust. But how had I got this idea of just and unjust? A man does not call a line crooked unless he has some idea of a straight line” (Mere Christianity, 15). Thus, he reasoned from this objective moral law to a Moral Law Giver (God). The atheist must make his painful choice: Either he loses the basis for his argument against God from evil, or he must admit there is an objective moral law which leads to a Moral Law Giver. One thing is certain: without God, the atheist cannot have objective goodness for goodness sake. Indeed, since “for goodness sake” is a euphemistic phrase meaning “For God’s sake,” then the atheist ad, both literarily and logically, should be rendered, “Why believe in God? Just be good for God’s sake.” In other words, it is precisely because there is a God that we can really be good. Without an absolutely good God, there is no real objective basis for being good.

Written for The John Ankerberg Show by Dr. Norman Geisler; ©2012.

Hominids had morality long before man created the religions…

If the only reason you are a good person is because you’re scared that your personal god will chuck you in a pit to burn for all eternity if you’re not going to be one, then you are a sad being with a sad existence. Christians need this celestial boogieman to be scared into being good, like children afraid of parents’ punishment. Atheists do not. The atheist who is a good person does so because he wants so at his own free will. Not because he is “commanded to” by a celestial dude with a beard in a robe. And… Read more »

Having read a few of your posts my comment addresses your absolute ignorance of morality in lives without God. Morality doesn’t come from God, morality encompasses right from wrong, personal responsibility and desire to treat others with respect, empathy and inclusion regardless of faith, lack thereof, race or sexual orientation. If this atheist were to accept your assertion of Christian morality, I would have to believe God’s word was the only thing preventing societal collapse – a preposterous assumption suggesting the faithful would become murderous, incestuous, criminal heathens without the threat of hellfire and damnation. With all due respect, people… Read more »

“There is a new atheist’s ad out with a picture of Santa Claus and the words: “Why believe in a god? Just be good for goodness sake.” This is clever, but is it possible? Let’s analyze it more carefully.” Hear that? The rustling straw? That’s the sound of a hundred straw-men coming a mile away. “First, if there is no Moral Law Giver (God), then how can there be a moral law that prescribes: “Be good.” Every prescription has a prescriber, and this is a moral prescription.” You are clearly not a humanist. Possibly not even a human. “Second, what… Read more »

I get my limits from a rational consideration of the consequences of my actions. There have been multiple studies that actually investigate the correlation between the religiosity of a society and its societal health, and there is always a strong negative correlation. The more non-religious the society, the better they score on societal health factors from everything from teenage pregnancy rates to STDs to happiness to wealth to… murder, rape, to health care. So the idea that secular morality offers no guarantee that people will ever pay for their crimes and their atrocities is not an argument against secular morality.… Read more »