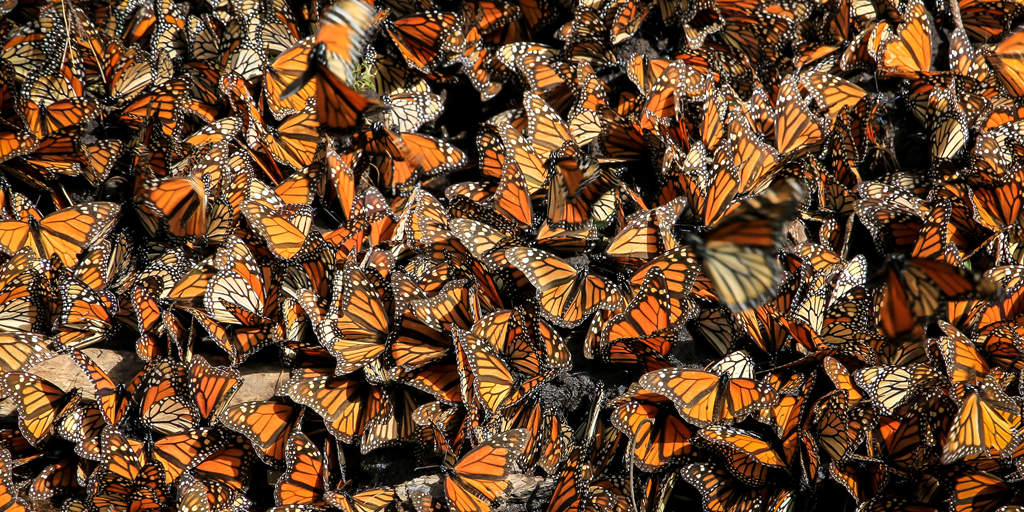 A recent visit to southern Florida has reignited my fascination with the monarch butterfly phenomenon. While visiting with family we noticed a number of beautiful monarchs feeding on flowers. One niece described the colorful monarch caterpillar on a species of milkweed outside her home. In our home residence of the upper midwest, the monarchs, their pupae, and larvae have long since vanished as of late October.

The spectacular monarch phenomenon has captured the attention of many people, old and young. We refer to the marvelous saga of the four stage metamorphosis of the monarch butterfly and its astonishing migration journey to a specific forest site in Mexico to overwinter. When our son was a five-year old, we snapped pictures of him holding a monarch butterfly just emerged from a chrysalis suspended from a Mason jar lid. The monarch metamorphosis adventure has gripped members of our family for many years. Some details of the life of this astonishing animal are not as well known as its miraculous journey to a special Mexican forest. Observing monarchs in Florida has triggered our search for additional knowledge.

The monarch butterfly, Danaus Plexippus, has been familiar to scientists for centuries. Details of its migration patterns, however, were unknown and unexplained. Butterflies were observed migrating to an unknown destination in late summer and early autumn, but the trail vanished in places such as Texas. Where did they go? The answer was revealed to the world in the August 1976 National Geographic by author Fred Urquhart. The location was described only as a cypress/fir forest somewhere in Mexico. Urquhart would not reveal the exact destination of the millions of monarchs, but other researchers soon discovered the exact location from obscure geographical cues in the Geographic article. That site has been revered by naturalists in the interest of protecting the monarchs. The migrating insects have suffered from many natural and human-caused hazards over the years. In North America 2018 thus far has been favorable for a population upswing. Worldwide, lepidopterists do not categorize the monarch butterfly as endangered.

In year-round warm regions such as Florida, not all monarchs migrate. Populations in such places as Australia and New Zealand and even Spain may respond to colder weather but are not impelled by distinctive migratory urgency. Over centuries the migratory gene, one of many thousands of genetic entities, has adapted and is expressed in different ways according to different circumstances. The Florida monarchs have lost their migratory capability but they are still the identical species—Danaus Plexippus.

Those monarchs which have not lost their direction finding capability have been discovered to possess sensitivity to light and different sun angles as well as magnetic fields of the Earth. Do light and magnetic fields offer a sufficient reductionist explanation of monarch migration, especially when their large scale migration concludes at a mere pinpoint location on the planet? Reductionism is a term for the scientific process whereby complex phenomena are explained by simpler ones. For example, Google Dictionary defines reductionism as follows: “The practice of analyzing a complex phenomenon in terms of phenomena that are held to represent a simpler or more fundamental level, especially when this is said to provide a sufficient explanation.” The question remains how light and magnetism provide a sufficient explanation, not merely a sufficient description of factors involved in the process. The monarch butterfly’s use of their antennae to follow the sun during their search for an overwintering site is explanatory up to a point. But it is primarily descriptive, as is their reliance on Earth’s magnetic field to find their way to the overwintering site. This post does not begin to explain how light and planetary magnetism guide monarchs to their wintering destination.

Whether we address the uniqueness of monarch butterfly behavior or the uniqueness of multiple thousands of other living species on our planet, we marvel in devotion to the omnipotent Creator. He has programmed easily recognized design features in all of the millions of Earth’s species. In addition God has programmed genetic adaptability within our DNA. Wonders of adaptability extend far beyond the incredible structure and code of the DNA molecule. Secrets of gene expression have been revealed, for instance, but many genetic wonders have yet to be discovered and disclosed. Secrets of consciousness, “the most mysterious phenomenon in the universe,” relate to the very essence of God, the Creator. Perhaps we will never discover these secrets this side of eternity.

Readers may understand our science/faith blog’s emphasis on monarchs during the past ten years in terms of comprehending one of God’s great creative ideas. For those interested, we link all 14 past posts on monarch butterflies since 2008 here: