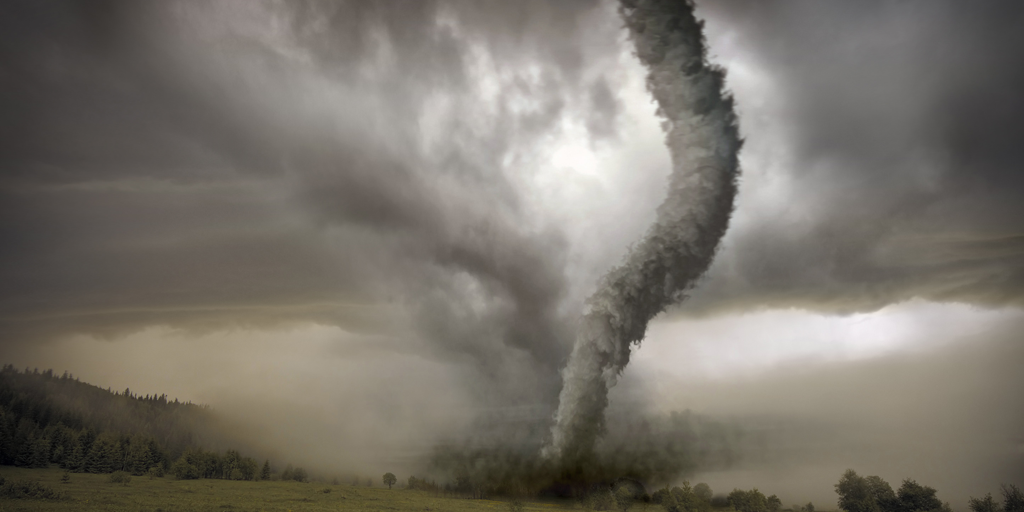 Our focus in recent weeks has been the destructive impact of hurricanes in the southeast quadrant of the United States. Hurricanes form when sufficiently warm oceans join with steering prevailing winds and other meteorological factors to produce just-right conditions for cyclone formation. Billions of Earth residents never experience hurricanes, including populations in South America, Europe, Africa, and most of Asia.

Tornadoes are even more violent than hurricanes. They occur over a much smaller area. Most form when large, cold air masses from the north collide with warm southern air masses already in place. Many prerequisites must be favorable for tornado formation. A tornado is one of Earth’s most awesome meteorological events. The likelihood of a tornado striking a given town in any specific year is small. Residents in tornado prone areas should keep a “weather eye” on forecasts. The United States is more vulnerable to tornadoes than any country in the world. A large area of the midwestern US is known as “tornado alley.” Many regions of the world never experience a tornado.

Thunderstorms, droughts, floods, and blizzards are part of the plethora of weather events. Over long periods these events comprise the elements of climate. We devour media reporting of both gentle and harsh weather events. Climate change is the topic du jour among many journalists who relentlessly link out of the ordinary contemporary weather events to this enormously complex topic, especially when they are unusual or destructive. Our Earth experiences harsh meteorological events to balance beautiful and beneficial weather events over the decades, centuries, and millennia of man’s sojourn. Our blog message has offered weather and climate issues in a balanced perspective in order to understand the world God created. He created our climate system with a purpose. When destructive storms destroy property and even human life on occasion, some attribute the events to God’s higher purpose.

The Creator has provided our physical Earth with its climate system as an abode for humanity. It is a wonderful home for over seven billion souls. The climate system is a product of God’s higher purpose, not only when weather disasters occur, but also when the weather and climate conditions supply bountiful food and joie de vivre. We are thankful that scientists have uncovered new knowledge of how Planet Earth has been geologically prepared for bountiful life and how its weather and climate system supports our planetary array of life. The causes of some nuances of weather and climate cycles remain unclear. We must search for wisdom and understanding of divine higher purposes from our heavenly Father.

Matching the profound deadly impact of the four recent landfalling hurricanes of 2017 was the tragic tornado super outbreak of 2011 primarily in Alabama and Mississippi on April 25-27. Those tornadoes took the lives of 348 people, second only to the deadly tornado outbreak of 1925 which killed 747. In contrast, the four recent US hurricanes cost 177 lives. Monetary damages from the hurricanes exceeded property damage costs of the tornadoes by multiples, but deaths from the 2011 tornado outbreak were double those from the hurricanes. Damage from the tornadoes totaled $11 billion while hurricane damage from this year’s hurricanes may total upwards of $300 billion.

When the tornado super outbreak occurred we were moved to submit serial commentary about weather events, both destructive and beneficial. We have attempted to analyze the issue of weather and climate with a balanced perspective. Weather events, both beneficial and harsh, are opportunities to revel in both the goodness and power of the Almighty God of creation. Our planet remains “a place to thrive” despite recurring inauspicious weather events.