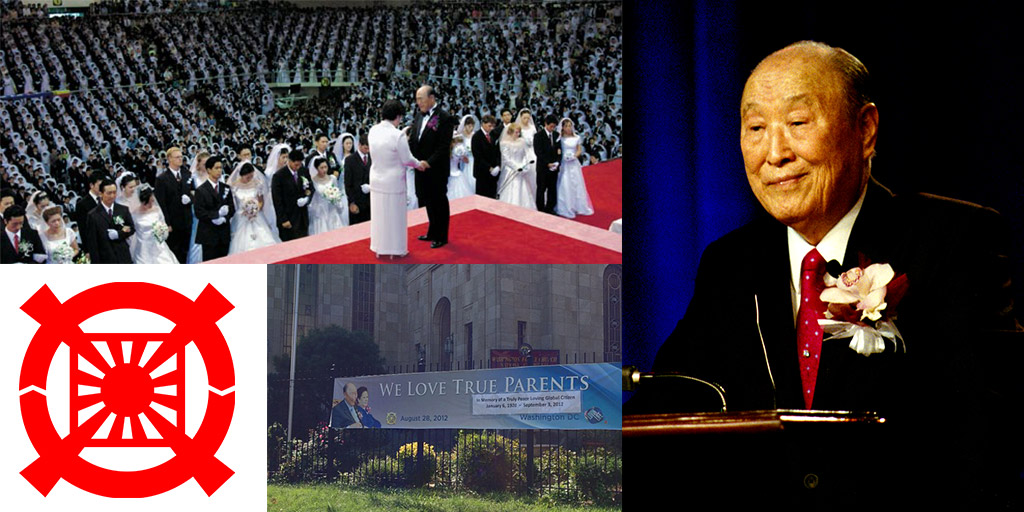 Teachings and Practice of the Unification Church – Part 1

Teachings and Practice of the Unification Church – Part 1

Sun Myung Moon’s worldview involves a combination of complex symbolic historical correspondences, Eastern philosophy, Taoism, occultism and an esoteric-allegoric interpretation of the Bible. Before we go into details, a brief background to Moon’s worldview is necessary. Moon believes God poured Himself “out” into the creation, so that the creation itself mirrors certain characteristics of God. God and the creation are really one, although the creation does not exhaust God. After the animal kingdom had evolved, God specially created Adam and Eve. However, they were created as brother and sister, not as husband and wife, and they were not perfect, but still in a stage of spiritual growth. Not until they were perfect could they marry, become husband and wife and have children. As God’s highest creation, they would then be able to establish the kingdom of God on earth through their sinless offspring. God would “complete” Himself through their sexual union (Moon teaches God cannot ultimately express His love without sexual union).

God’s plan had failed. Although He tried desperately to establish “the Providence of Restoration” (restoring man to his original condition), His plans continually failed, thwarted by both man and Satan. Until 2,000 years ago there was no totally obedient man whom God could use to restore people to himself, both physically and spiritually. (Because the Fall was physical and spiritual, “salvation” must encompass both of these.) Not until Jesus Christ was there a man obedient to God, and it was God’s hope that Jesus would be able to restore man to Him, and that all religions and cultures would unify under Him. But God’s plans were thwarted again. Jesus was crucified—something God never intended.

In Unification theology God is not omniscient. Because God did not know if people would accept Jesus, He put prophecies in the Bible of acceptance and rejection to cover all bases, so to speak. As a result, UC members view Old Testament prophecies about Jesus’ crucifixion in light of this “foreseen” failure on the part of people to accept God’s will.

What follows becomes complex in places, however, the information is vital to understanding Unification Church theology. According to Divine Principle (DP) and other sources, “God is energy itself.”[1] God contains or is the source of energy called Universal Prime Energy (UPE). It is the basic energy of God’s being and allows all things to maintain their existence. It was poured out into the creation. “In the process of creation, God poured out all His Being into the Universe He made.”[1] Although in itself the creation does not exhaust God (in this sense, God and the universe are “two” entities), in divine essence they are one. The universe is thus related to God’s being in that the entire creation is a part of God’s energy.

The physical universe itself, then, is divine. Unification theology denies creation in the biblical sense (ex-nihilo), and instead views the creation as a “projection” or emanation of God. As a result, the universe is seen as God’s body, and as much God as God is God. This is panentheism. Dr. Young Oon Kim, professor of systematic theology at the Unification Theological Seminary in Barrytown, NY, states that God “makes His presence known in the totality of creation which serves as His body….”[2] In the Divine Principle we read that “the universe is the substantial manifestation of the invisible God.”[3]

Man, too, as part of the creation, is one essence with God. Indeed, every entity in creation has a nature that mirrors the nature of God. “His nature is displayed in each creation.”[4] According to the UC, God’s nature consists of pairs of dualities: male and female (perhaps the central UC duality), positivity and negativity, subject and object, internal and external, character and form, horizontal and vertical and so on. Every creation, from sub-atomic particles to giant suns, contains these characteristics.

Every creation also “functions” through a reciprocal relationship, both internal and external. For example, the internal duality of sub-atomic particles (positivity, negativity) “reciprocate” to form an atom. Atoms assume either positive or negative characteristics, and reciprocate with other atoms to form molecules. Molecules produce matter, which eventually forms plants and animals who reciprocate with each other based on external dual characteristics (for example, male, female), but also containing internal duality. In this ontology, every man (and every creation) has a feminine aspect, and vice-versa, and so on down the line. This condition of containing external and internal dualities and reciprocation is true for every creation. “All things are created to exist through a reciprocal relationship between their dual essentialities.”[5] Thus, every creation has external form (that which is visible) and internal character (that which is invisible), a reflection or projection of it. They are really “two relative aspects of the same existence,” so that external form can be accurately called a “second internal character.” Moon calls them dual characteristics or dual essentialities.[6]

The internal character (which is invisible) stands in what Moon calls the subjective position and is the cause, or origin, of the visible external form, which stands in an objective position. The reciprocal relationship that exists here comprises the pairs of dualities, such as internal-external, cause-result and subject-object. It logically follows that since the body is the “copy of the mind” it should be completely under the control of the mind.

Again, the pairs of dualities within the unmanifested God were manifest in the creation.

The relationship of one creation to another varies, depending upon what it is related to (itself, a person, nature, God). Thus in relation to the universe, God is “the masculine subject representing its internal character.” [9]

“B” is in the objective position to God the Subject, but B itself (and each creation in B) contains subject and object, positive and negative and so on in all their constituent parts, which interact with other dualities in all their specific ways. Thus “every creation is [in the position of being] a ‘substantial object’ of the invisible deity of God.”[10] The universe, then, is alive. The universe was created with God at the center, just as man being created in God’s image (Genesis 1:27) has been created with his mind at the center. [11]

God as the internal masculine subject created the universe as His external feminine object. God’s positivity is masculine; His negativity is feminine. We can begin to see here why God cannot complete Himself without the sex act and why one of Jesus’ greatest failures was His failure to marry and have sex. “Unless male and female beings come together and are united, there is no way for God to express His love ultimately.”[13] Male and female reflect God and the Universe. In a sense, God is androgynous, currently engaged in “sexual” (emotional) intercourse with the universe, or Himself.

God as subject gives love as an emotional force to His object; His object (creation) returns beauty as an emotional force to the subject; bringing God perfect joy. When this relationship was ruined in the Fall, God “went to pieces” emotionally. He was extremely upset about this since His chances for perfect joy were thwarted and He lost everything He had hoped for. After all, for eternity God had existed alone—lonely—just as if we humans existed only as a mind in a glass bubble without a body. Projecting a universe gave God the joy our minds get from our having a body.”[14] Only now, at the Fall, the Body became “corrupted.” God is, in a real sense, a cripple. He must find someone to cure and perfect His Body. He must, or He will be unhappy forever.

GTA is also the “cause” of the universe. God’s internal unmanifested subject and object entered a relationship through the UPF. The action between the subject and object caused by UPF was the GTA. Through UPF God’s GTA resulted in creation. We may diagram this as follows:

Since everything functions “as God” does, Adam and Eve were created in a similar manner. Through UPF, God’s dual characteristics entered GTA by forming a reciprocal relationship, causing multiplication; that is, His dual characteristics separated into “two substantial objects centered upon God”[17] (Adam and Eve). These may enter into their own GTA by forming a reciprocal relationship through UPF (through intercourse). ‘By forming one unit they become an object to God.”[18] Thus (part of) God is divided into two separate substances that unite to form one body. This process is called Origin-Division Union Action (ODUA).

God’s dual characteristics (origin) multiply by means of GTA into two beings (division) who unite (union) through GTA. This is ODU Action.