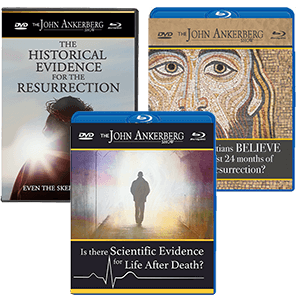 As a scholar and researcher who is knowledgable within several diverse topics, Dr. Gary Habermas clearly and concisely explains the findings that have persuaded many skeptics to accept the truth of Jesus Christ. In these three series, he covers the historical evidence surrounding the resurrection of Jesus Christ, the creedal statements that helped solidify the early church, and the support we find for the belief in an after life. Utilizing decades of research, these evidences will strengthen your faith and help you share it with those around you.

The Historical Evidence for the Resurrection Even the Skeptics Believe

Did you know that a revolution is taking place in the academic world regarding the resurrection of Jesus? Today, much of what skeptics have long declared about Jesus is no longer accepted even among secular scholars. Dr. Gary Habermas, the world’s leading expert on the evidence for the resurrection, has been tracking these changes for the past 40 years. In our five programs, we address 12 historical facts about the death, burial, and resurrection of Jesus that are accepted among most religious scholars. Using only five or six of these facts, Dr. Habermas offers substantial historical proof to support the literal resurrection of Jesus Christ. Perfect to strengthen your faith or to use in sharing your faith with others, “The Historical Evidence for the Resurrection Even the Skeptics Believe” offers a unique and powerful resource. You’ll be informed and inspired, ready to give an answer to anyone who asks about your faith.

Is there Scientific Evidence for Life After Death?

Millions of people have claimed to have near death experiences. What evidence exists to support the accuracy of these experiences? How do near death experiences connect with our Christian beliefs? In this three-program series with Dr. Gary Habermas, he reveals stories and statistics related to this intriguing debate. Based on documented scientific studies, the evidence increasingly points to “something” that takes place beyond our physical realm. These experiences point to a spiritual realm, offering an additional area of credibility to support the existence of God and the afterlife.

What did Christians Believe within the first 24 months of the Resurrection?

Who is Dr. Gary Habermas?

Dr. Gary Habermas is a distinguished Research Professor and Chair of the Department of Philosophy and Theology at Liberty University. He holds a Ph.D. from Michigan State University and an M.A. from the University of Detroit.

Dr. Gary Habermas has dedicated his professional life to the examination of the relevant historical, philosophical, and theological issues surrounding the death and resurrection of Jesus. He is a prolific author of numerous books and more than 100 academic publications. Dr. Habermas has been a visiting or Adjunct Professor at 15 different graduate schools and seminaries in the United States and abroad.