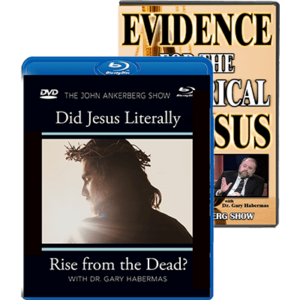 Did Jesus Literally Rise From the Dead?

What would you say if you heard there are 12 historical facts about Jesus’ death, burial, and resurrection that nearly every historical scholar accepts as true? In our new series “Did Jesus Literally Rise from the Dead?” Dr. Gary Habermas, the world’s foremost authority on the evidence for the resurrection of Jesus, discusses his research featuring the strongest evidence in defense of the faith. He shares 12 key historical facts accepted about Jesus, including the crucifixion, death, empty tomb, and early growth of Christianity. This is evidence from within the first five years of the resurrection that support the teachings of the New Testament regarding Jesus. You’ll be encouraged and equipped as you grow in your faith during this groundbreaking new series.

The Evidence for the Historical Jesus

This classic series covers questions like: How do we know that the Jesus of history is the same Jesus of our Christian faith? How can we know what message was preached about Jesus BEFORE any of the New Testament books were written? Are there any non-Christian sources that tell us Jesus actually lived, died on a cross, was buried, and afterwards was seen by His disciples? What historical material inside and outside of the New Testament shows Jesus Himself said that He was God? What historical facts show that a few days after Jesus was buried His tomb was found empty? Is it possible for a skeptic to get from “the disciples THOUGHT they saw Jesus after He died” to “the disciples actually SAW Jesus”?