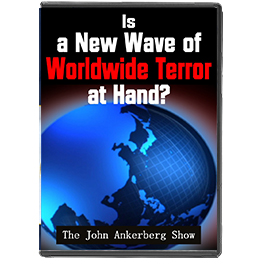 Is a New Wave of Worldwide Terror at Hand?

The Oslo Accords, Camp David, and the Geneva Accords: Did the Palestinians ever intend for any of that stuff to really be true or to happen. Is it possible that an Israeli-Palestinian? that we’ll have two states in our lifetime? Will it happen? And if so, will we have peace? And what does the Bible say about this? A look at other nations that the Bible says are going to form a coalition in the end times. What do Americans believe about the importance of Israel? The Bible has a whole lot to say about this. Are America, Europe and Russia mentioned in future prophetic events? Is America mentioned in future prophetic events? Is the Second Coming under attack inside the Christian church here in America? The signs of the times. What is happening in Israel right now that’s also part of biblical prophecy, the Jews’ desire to rebuild the third Temple. Jewish law says that the Temple, if it’s going to be rebuilt, it has got to be rebuilt on the site of its predecessors. It’s now occupied by two of Islam’s holiest shrines: the Dome of the Rock and the Al-Aqsa Mosque. Are we on a major collision course?