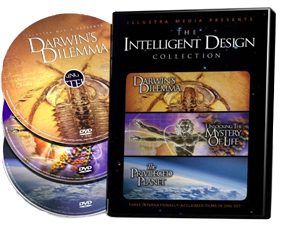 This documentary trilogy presents the scientific case for intelligent design.

Darwin’s Dilemma examines what many consider to be the most powerful refutation of Darwinian evolution – the Cambrian fossil record.  Charles Darwin realized that the fossil evidence did not support his theory of gradual, step-by-step evolutionary development. Today, after more than 150 years of exploration fossil evidence of slow, incremental biological change has yet to be excavated. This remarkable explosion of life is truly Darwin’s Dilemma and is best explained by the existence of a transcendent intelligence.  Unlocking the Mystery of Life (released in 2002) reveals compelling evidence for design at the level of molecules and cells. The Privileged Planet (2004) explores the depths of the cosmos in a memorable search for purpose in the universe. These critically-acclaimed documentaries were broadcast on PBS and translated into more than 20 languages. They have inspired and educated millions and fueled an international debate on the origin of life.