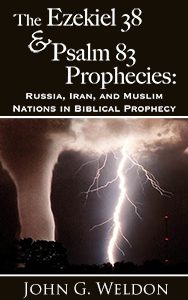 The amazing prophecies in Ezekiel 38 & 39, written 2,600 years ago, have received a lot of attention recently because of current events in the Middle East, North Africa, Europe, & Russia. Ezekiel has over 800 predictive verses. This remarkable prophecy by one of the greatest of ancient Hebrew prophets never before literally fulfilled in history predicts that a great power to the far north of Israel & a coalition of nations a massive horde of people, will attack Israel & be destroyed supernaturally by God on the mountains of Israel. God promises this day is coming. Perhaps it’s coming soon. The historically miraculous rebirth of the Jewish state in 1948, after 2,000 years of nonexistence, & the conquering of East Jerusalem during the Six-Day War in 1967 & other factors seem to have set the stage for a time clock of sorts relative to the upcoming “last days” of Israel & the fulfillment of many remaining prophecies relevant to that period. &, indeed, today Russia, a great power to Israel’s far north & the Muslim nations, particularly Iran, are growing increasingly intertwined & hostile toward Israel.