Do You Know Mary? 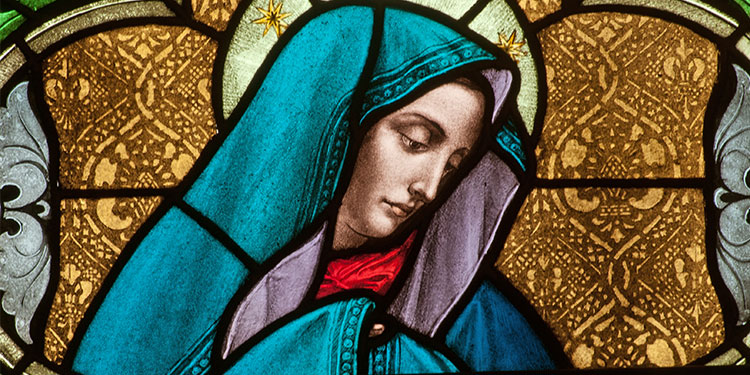 Do You Know Mary?

I wonder, do you know the Mary of Mary’s Well, in Nazareth, Israel, and of the Gospels? She was a very special woman, blessed by God, and occupies a unique place in history. There has never been another woman just like her. She is an example to all women of purity, humility, faith and obedience. But I’d like you to notice some things that the Rosary says about Mary:

Take the example of John the Baptist. The Lord Jesus said that John was the greatest of the prophets, but when they asked John, “Who are you?” he refused to take any title or honor for himself. He said, “I am not the Christ… I am not…no” (John 1:20-21). Each time he spoke he had less to say about himself, as if he were shrinking! And when they insisted, “What do you say concerning yourself?” he answered, “I am the voice of one crying in the wilderness” (John 1:23).

The case of Mary is similar. She was specially blessed of God to conceive and bear the Lord Jesus, and the angel called her “highly favored” (Luke 1:28). But there is a great distance between this statement and all the titles that the followers and devotees of Mary give her today. And as in the case of John the Baptist, if we allow Mary to speak of herself, this is what she says, “Behold, the handmaid of the Lord” (Luke 1:38), and “my spirit hath rejoiced in God my Savior” (Luke 1:47). Mary did not lie, I’m sure we agree, and there you have it, she said that God was her Savior, which means she needed to be saved. She knew well who she was, and we have it from her own mouth in the humblest of words.

John the Baptist, the greatest of the prophets, said about the Lord Jesus, “he must increase but I must decrease” (John 3:30). This is the way it was with Mary as well. In John 2:5 she moved into the background and told the servants this about Jesus, “Whatever He says to you, do it.” If the devotees of Mary really believed her and took her advice, from this moment forward they would be devotees of Jesus Christ, not of Mary. The key to eternal life and the grace of God is the Lord Jesus Christ, not Mary. The Lord Jesus said, “that all men should honor the Son, even as they honor the Father” (John 5:23). We are not told to honor Mary as divine or heavenly. There is no place in the Scriptures where the Apostles or early Christians prayed to Mary or venerated her. Did you know that there is no Rosary anywhere in the New Testament? When the Lord Jesus spoke of heaven, He said, “I am the way, and the truth, and the life. No man cometh unto the Father but by me” (John 14:6). He never said, “To Jesus through Mary,” but rather, as His words indicate, the way to God the Father is through Jesus Christ. So let’s not allow ourselves to be deceived, nor allow our respect for Mary to be misguided by traditions or sentimentalism. She is blessed, but she is not the way to God. The Lord Jesus Christ is the way, the only way (see Peter’s words in Acts 4:12).

Who, then, is the Mary of the Bible? To answer that question we will need to go directly to the Scriptures, not to the Missal, prayer book, catechisms, etc. It’s like drinking water right from the fountainhead, instead of the muddy stream. In the Bible we have already seen that the angel said, “highly favored,” and Mary replied, “Behold, the handmaid of the Lord”. The Lord Jesus called her, “woman” (John 2:4), not “holy mother”. The Apostles knew her as “Mary the mother of Jesus” (Acts 1:14), not as “Mother of God”. For true believers, here are four texts, one from an angel, one from Mary herself, one from the Lord Jesus, and one from the Apostles, that describe the Biblical Mary.

Strangely, in spite of the clear record, there are people who insist on exalting a humble godly woman and making her something that neither angels, apostles, the Lord nor Mary herself claimed to be: a goddess. Perhaps they are unaware that this is the sin of idolatry, but the Mary that they have fabricated is a religious legend, not the true Mary of the Bible. It is another woman disguised as Mary who receives the devotion of her followers.

She is not the mother of God. No one in heaven, or in the Church in the New Testament called Mary “Mother of God,” because God does not have a mother or a beginning; He is eternal. God the Son existed in heaven in perfect fellowship and glory with the Father before creation (see John 17:5). Mary is the mother of Jesus, simply the human vessel through which God became flesh, blessed to receive the Incarnate Lord, not to make Him.

She is most certainly not the door of heaven, for this is a phrase that describes the Lord Jesus Christ. As with many of her titles, they have apparently been robbed from Christ, long years ago, by people who didn’t really know Him, love Him, follow Him, or find Him to be suffi­cient as their Savior. Were they sincere? Probably. But the simple fact is, they insult the Lord Jesus by taking His titles and giving them to His human mother. He said, “I am the door, by me if any man enter in, he shall be saved” (John 10:9). That is about as clear as it can be. There­fore, to call Mary the door of heaven is nothing less than blasphemy.

The Mary of the Bible is not the mother of all grace, because grace proceeds uniquely from God the Father and Jesus Christ (see Gal.1:3; Eph. 1:2; Phil. 1:2; Col. 1:2; 1 Thess. 1:1, etc.). It is not dispensed by humans but received by them, nor is it dispensed by churches or through sacraments, but only by God. Men should look to God for grace, not to Mary nor to any church.

She is not the throne of wisdom, because wisdom comes from God. She is not given a throne and has no spiritual wisdom to give others. We can learn from her example how to believe God and obey Him in a humble way, but she does not dispense wisdom. True wisdom descends from above, from the Father of lights (James 1:17; 3:17). There is no such thing as a “mother of lights”.

She is emphatically not the queen of heaven, let’s be clear about this, because the Bible never gives her this title. There is no queen ruling in heaven. The throne belongs to God and to the Lamb, but not to Mary (see Revelation 7:15,17; 22:1). In John 14:1 the Lord called heaven, “my Father’s house,” but never said it was His mother’s house. Those who know the Holy Scriptures know that “queen of heaven” is an idolatrous title from the pagan mythology of Babylon (Semiramis), repeated in Egypt (Isis) and elsewhere by other names (see Jeremiah 44:15-19, 25). According to verse 15 of this text, many of the devotees of the pagan “queen of heaven” were women. This pagan practice of devotion to female deities invaded the professing church after the Roman Emperor legalized Christianity and professed to believe, making it popular. Instead of being persecuted, Christians were to be allowed to build temples to worship in, and some pagans erased the names of their gods and goddesses and substituted Biblical names. Instead of the Babylonian mother-god Semiramis and her son Tammuz, or the Egyp­tian mother-god Isis, and her son Horus, they put the names Mary and Jesus. This practice of devotion to the mother and her son is neither Christian, nor apostolic, nor Biblical.

We are not told to believe in Mary, trust her, nor pray to her. The Lord Jesus said, “Ye believe in God, believe also in me” (John 14:1) but He never said, “believe also in my mother.” If it were necessary, why didn’t He say so? He taught the disciples to pray in that wonderful way, saying, “Our Father, which art in heaven, hallowed be thy name” but have you noticed that He never taught them to pray to Mary? Christ said that whatever we ask the Father in His name, will be given us (John 15:16; 16:23). We can go directly to the Father through the Son, and Mary is never presented as a mediatrix or intercessor. No one in the New Testament ever prayed to her. The true Mary cannot hear our prayers nor answer them. She would have to be omniscient, omnipresent, and omnipotent to do that, and she is not, for she is not God. Anyone who prays to her is guilty of false religion and idolatry.

The Mary of the Bible has already told us who she is. I invite you to look up and read each of the Scriptures, and see for yourself what the truth is in the Bible. The angel Gabriel has spoken. The Holy Apostles have spoken. The Lord Jesus has spoken, and this should be enough. He said, “I and my Father are one” (John 10:30), but never mentioned Mary in this way. Nothing can be added to contradict or modify what the Scriptures say. But if in spite of this anyone continues venerating and practicing devotion to the legendary or mystical Mary that certain churches promote, then such a person shows that he is not a true believer. He is a pagan devotee of a goddess who uses the name of Mary to turn people away from God the Father and the Lord Jesus Christ.

Friend, if you have venerated or prayed to Mary, I think you can see from the Scriptures such behavior is not pleasing to God. Perhaps you did it sincerely, but in ignorance. Neverthe­less, now that you know the truth, you should confess it as sin, repent, and put all your faith in the Lord Jesus Christ alone, for He alone can save you. I hope you’ll take the advice of Mary and do whatever the Son says. He says that we should trust in Him for eternal life (John 3:16). And while you’re at it, take the advice of John the Baptist, too, and let the Lord Jesus Christ increase in your life. The apostolic doctrine teaches us that there is one God and one mediator between God and men, not one God and many mediators. The one whose is both God and Mediator is named Christ Jesus. Do you know Him, and have you put your trust in Him alone for salvation? If not, I hope you’ll do so right now.|Mary (Mother of Jesus)]]