Is the One True Church Roman Catholicism? 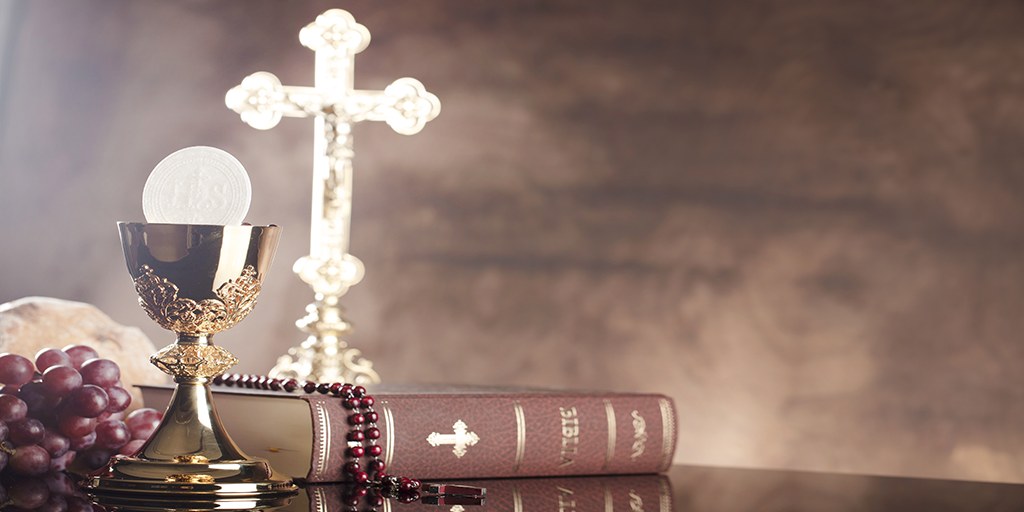 Is the One True Church Roman Catholic?

Is there only one true church? And if there is, can we identify it? Does it have marks by which it can be known? These questions often create quite a controversy but God answers them objectively and clearly in His Holy Word. The true church is not a denomination or a building or a cathedral. Locally, it is an assembly of believers in the Lord Jesus Christ. Universally, it includes all those chosen by God to be born again (Eph. 1:14; 1 Pet. 1:3). The church is made up of all believers of past generations from all nations and cultures. These believers have been purified by the blood of Jesus, sealed by the Spirit of God and sit securely in the hand of God (John 10:28; Eph. 1:13; 1 John 1:7). Addressed as saints, they have been baptized by one Spirit into one body (1 Cor. 1:2; 12:13). They are visible to others when the light of their good works shines before men to glorify their heavenly Father (Mt. 5:16). They are also invisible in the sense that only God can infallibly see who among the “professing” Christians are His (2 Tim. 2:19).

All Protestant and Roman Catholic Churches together make up the “professing” Church. The “true” church is only a small part of the “professing” church, which includes both born again believers and mere professors of Christ (James 1:14). Jesus called believers “the wheat” and mere professors, who are sons of the evil one, “the tares” (Mt. 13:24-30, 36- 43). Unless the tares experience the second birth, they will one day be deathly horrified when they hear Jesus declare from His Great White Throne: “I never knew you, depart from Me” (Mat. 7:23).

There is convincing biblical evidence which proves the Roman Catholic Church is not “the one true church” nor “the household of God” nor “the pillar and foundation of the truth.” In his first letter to Timothy, Paul uses the imagery of a spiritual temple to describe the Church. The “pillars” are that which uphold the truth as revealed and recorded in Scripture. Assuredly, the church upholds the truth but is not named as the source of truth. The “foun­dation of the truth” is Jesus Christ, who is the very personification of truth. Paul writes: “For no man can lay a foundation other than the one which is laid, which is Jesus Christ” (1 Cor. 3:11). Christ is the cornerstone of the foundation which includes the prophets and the apostles, who gave divinely inspired testimony of Jesus Christ (Eph. 2:20). Clearly this foundation was laid and completed in the first century. Once a builder lays a foundation, he does not continue to add to it. Yet the Catholic Church continues to add to its foundation with claims of apostolic succession, infallible papal pronouncements and evolving Tradition. The Catholic Church must be rejected as the church of the apostles because it has sub­verted and nullified apostolic doctrines with traditions of pagan origin. Like the Jews of old, the Roman Church “mingled with the nations, and learned their practices, and served their idols, which became a snare to them…Thus they became unclean in their practices, and played the harlot in their deeds” (Psalm 106:35-39).

Only the true church is the pillar of truth, because all its members have come to the knowledge of the truth and are saved (1 Tim. 2:4). The household of God includes those who have been called out of the world by believing the truth (James 1:18). Contrast this with Catholics who are always learning and never able to come to the knowledge of the truth because they have compromised the Gospel (2 Tim. 3:7). Roman Catholic Councils stand opposed to the faith of the Apostles by condemning those who believe the Gospel. Thus, the institution must be rejected as part of the household of God (2 Tim. 3:8).

The true church is made up of the spirits of just men made perfect, whose names are written in heaven in the Lamb’s book of life (Heb. 12:22-23; Rev. 21:27). It is the bride of Christ, the flock of the Shepherd and the adopted family of God. The church is one body, with one Spirit, one hope, one Lord, one faith, one baptism, one God and Father of all who is over all and through all and in all (Eph. 4:4-6). Its members are a chosen generation who were purchased and redeemed by the blood of Christ. The gates of hell shall not prevail against it (Matt. 16:18). It is the only Church which is certain to endure unto the end. Noth­ing can destroy it. Its members may be persecuted, imprisoned, beaten and murdered; but if it is ever blotted out in one country, it will rise up in another.

The true church is united by faith in the Gospel because all its members are taught by one Spirit and are one in Christ (Gal. 3:28; 1 Jn. 2:27). All are united to Christ and to one another. The true church is exclusive and set apart from the world. There is no salvation outside this church. Until a person belongs to this church they are lost, helpless and hope­less. However, once entering this Church, there is no possibility of being cast away. All the ordained men in the world could never excommunicate one member of the true church. The continual intercession of Jesus and the sealing power of the Holy Spirit keep every member secure in the Father’s hand (Heb. 7:25; Eph. 1:13-14; Jn. 10:29).

Some glorious promises are given to the true church, those who are united by grace through faith in Jesus Christ. They include : the complete forgiveness of sins, His imputed righteousness, the assurance of eternal life and a relationship with Him apart from media­tors. The Catholic Church not only withholds these promises from their people, but con­demns anyone who believes them.

Members of the true church have equal access to the throne of grace through the veil that was torn open at the moment of Christ’s death (Heb. 10:19-22). They are all royal priests who offer “spiritual” sacrifices to God. The Roman Catholic Church has a select priesthood who offer “physical” sacrifices to God for the sins of the people. Jesus Christ is the head of the true church. He is one Shepherd of the one flock (John 10:16). Yet, the Catholic Church declares the pope to be the infallible head of all Christians.

The purpose of the church is to proclaim the Gospel of Jesus Christ—”the excellencies of Him who has called [sinners] out of darkness into His marvelous light” (1 Pet. 2:9). Only the true church knows and believes the true Gospel. If you take any of its members from the remote corners of the earth and ask them to define the Gospel, they will all be in one accord. Take several Roman Catholics from the same corners of the world and you will find no unity in the Gospel of Jesus Christ. Instead they will proclaim another gospel—salvation through a system of sacraments, rituals and human effort. The Roman Church and its gospel is hostile and opposed to the unique message of Christ as evidenced by its history and dogmas. For centuries the Roman Church persecuted, tortured and murdered mem­bers of the true Church. It has also been the most anti-Semitic institution on earth in the last 75 years.

There is only one door to enter the true church and that door is Jesus Christ. He alone, by His Spirit, admits members of this Church. Until He opens the door no man can enter. The gate and the way to eternal life is narrow (Mat. 7:13). The few who find it must strive to enter by testing it with the word of God (Luke 13:24). Those who find it will one day be presented blameless before the Father’s throne (Jude 24). Many of the one billion souls in the Roman Catholic Church have entered the road to eternity through the wide gate that leads to destruction. There is no striving to enter this church because water baptism, with­out personal faith, is the normal means of entering. The members of this church, who have taught and believed a false gospel, will be judged at the great white throne and then cast into the lake of fire (Rev. 20:11-14). In the end, those who did not belong to the true Church, it would have been better if they had never been born.

Are any members of the true church worshipping in the Roman Catholic Church? There may be a few whom the Holy Spirit has yet to call out. Eventually, those who are born of the Holy Spirit, who abide in God’s word, will come to know the truth and be set free from the legalistic deception of Rome. As they speak out against Rome’s false gospel, they will find themselves unwelcome, and be forced to leave. They will also find themselves at odds with the deadly errors and idolatry of the Roman Catholic Church and will desire to come out of her to worship God in Spirit and Truth.

For those who may not be members of the one true church, may God give you the grace to turn to its Supreme Head, the Lord Jesus Christ as He is revealed in the Bible. Only then will you see that He is sufficient to save sinners completely and forever. You will also see that if you continue to trust your own righteousness, your good works, the sacraments, purgatory, indulgences and other mediators, you are nullifying the grace of God (Rom. 11:6). Since grace is the only means by which God saves sinners, you must come to Christ with empty hands of faith. “For by grace you have been saved through faith; and that not of yourselves, it is the gift of God; not as a result of works, that no one should boast” (Eph. 2:8-9).

Wrap Up On Is the One True Church Roman Catholicism