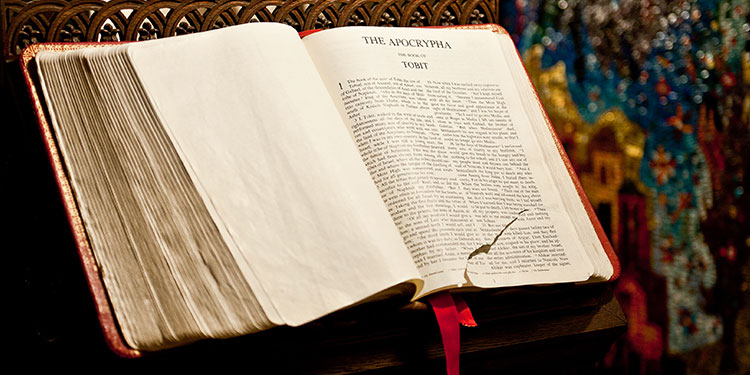 The true and false views of what determines canon­icity can be contrasted as follows (see Geisler, General Introduction, 221).

Catholic sources can be cited to support a doctrine of canonicity that looks very much like the “correct view.” The problem is that Catholic apologists often equivocate on this issue. Peter Kreeft, for example, argued that the church must be infallible if the Bible is, since the effect cannot be greater than the cause and the church caused the canon. But if the church is regulated by the canon, not ruler over it, then the church is not the cause of the canon. Other defenders of Catholicism make the same mistake, giving lip-service on the one hand to the fact that the church only discovers the canon, yet on the other hand constructing an argument that makes the church the determiner of the canon. They neglect the fact that it is God who caused (by inspiration) the canonical Scriptures, not the church.

This misunderstanding is sometimes evident in the equivocal use of the word witness. When we speak of the church as being a “witness” to the canon after the time it was written we do not mean in the sense of being an eyewitness (i.e., relating first-hand evidence). The proper role of the Christian church in discovering which books belong in the canon can be reduced to several precepts.

In a certain sense, the church does “judge” the canon. It is called upon, as all juries are, to engage in an active sifting and weighing of the evidence as it renders a verdict. But this is not what the Roman Church practiced in its magisterial role in determining the canon. After all, this is what is meant by the “teaching magisterium” of the church. The Roman Catholic hierarchy is not merely ministerial; it is magisterial. It has a judicial role, not just an administrative one. It is not just a jury looking at evidence; it is a judge determining what counts as evidence.

Therein lies the problem. In exercising its magisterial role, the Roman Catholic church chose the wrong course in rendering its decision about the Apocrypha. First, it chose to follow the wrong criterion, Christian usage rather than propheticity. Second, it used second­hand evidence of later writers rather than the only first-hand evidence for canonicity (divine confirmation of the author’s propheticity). Third, it did not use immediate confirmation by contemporaries but the later statements of people separated from the events by centuries. All of these mistakes arose out of a misconception of the very role of the church as judge rather than jury as magistrate rather than minister, a sovereign over rather than servant of the canon. By contrast, the Protestant rejection of the Apocrypha was based on an under­standing of the role of the first witnesses to propheticity and the church as custodian of that evidence for authenticity.

Reasons for Rejecting. None of the New Testament Apocrypha have experienced more than a local or temporary acceptance. Most have enjoyed at best a quasi-canonical status, merely appended to various manuscripts or listed in tables of contents. No major canon or church council accepted them as part of the inspired Word of God. Where they were ac­cepted into the canon by groups of Christians it was because they were believed wrongly to have been written by an apostle or referred to by an inspired book (for example, Col. 4:16). Once this was known to be false they were rejected as canonical.

Differences over the Old Testament Apocrypha play a crucial role in Ro­man Catholic and Protestant differences over such teachings as purgatory and prayers for the dead. There is no evidence that the Apocryphal books are inspired and, therefore, should be part of the canon of inspired Scripture. They do not claim to be inspired, nor is inspiration credited to them by the Jewish community that produced them. They are never quoted as Scripture in the New Testament. Many early fathers, including Jerome, categori­cally rejected them. Adding them to the Bible with an infallible decree at the Council of Trent shows evidence of being a dogmatic and polemical pronouncement calculated to bolster support for doctrines that do not find clear support in any of the canonical books.

In view of the strong evidence against the Apocrypha, the decision by the Roman Catho­lic and Orthodox churches to pronounce them canonical is both unfounded and rejected by Protestants. It is a serious error to admit nonrevelational material to corrupt the written revelation of God and undermine the divine authority of Scripture (Ramm, 65).

H. Andrews, An Introduction to the Apocryphal Books of the Old and New Testaments

Augustine, The City of God.

R. Beckwith, The Old Testament Canon of the New Testament Church and Its Background in Early Judaism

B. Metzger, An Introduction to the Apocrypha

B. Ramm, The Pattern of Religious Authority

P. Schaff, The Creeds of Christendom

A. Souter, The Text and Canon of the New Testament

B. Westcott, A General Survey of the Canon of the New Testament