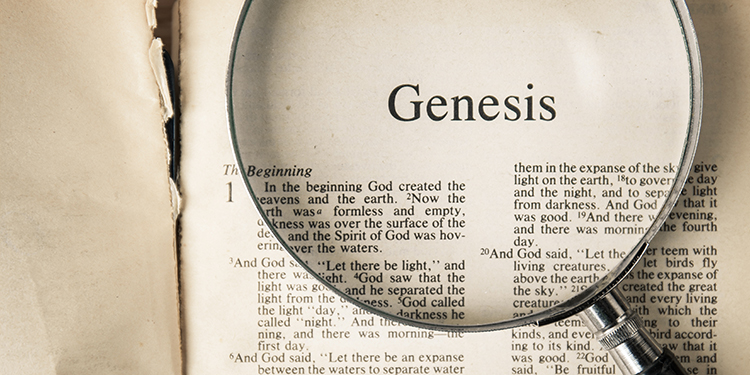 6:2 The identity of the “sons of God” is disputed. Some interpret the term as referring to supernatural beings, followers of Satan, who cohabited with human women (the “daughters of men,” cf. Job 1:6; 2:1; Jude 6, 7). A second interpretation is that the “sons of God” were the descendants of Seth and the “daughters of men” were the descendants of Cain; their sin was the intermarriage between the godly and the ungodly (cf. chapters 4, 5). The Cainites were characterized by cleverness, culture, civilization, selfishness, sensuality and ungodliness (4:16–24). On the other hand, the Sethites were devoted to God (4:25), consecrated to God (4:26), enjoyed fellowship with God (5:22), testified for God (Heb. 11:5), served God (5:29), and received grace from God (v. 8). A third view interprets “sons of God” as pagan kings, often viewed in the ancient Near East as the offspring and representatives of the gods. According to this interpretation, these kings produced large harems and introduced unprecedented decadence. Whatever the nature or agents of the sin, it was sufficient to grieve the Lord so much (v. 6) that He sent the Flood.[1]

6:1–4. Sons of God (Heb. bene elohim) refers to the godly line of Seth, which intermarried with the daughters of men, the ungodly line of Cain. The result of these spiritually mixed marriages brought the judgment of God upon the primeval world. While the term sons of God refers to angels in some passages (e.g., Job 1:6), this is certainly not the case here. Jesus clearly taught that angels do not “marry or give in marriage” (Matt. 22:30).[2]

6:1–4. The sons of God saw the daughters of men… and they took them wives of all which they chose. The earth’s population grew rapidly with the longevity of men. The point of this passage, whichever way we take it, is that a new stage has been reached in the progress of evil. The theme of the rulers, Lamech, etc., in 4:23ff, is resumed. Here, the pinnacle of abominations is reached, provoking divine vengeance. The sons of God are identified by some as the sons of Seth, as against those of Cain. Others, including early Jewish writers, take them to mean angels. Most students are familiar with the arguments, pro and con, of these views, so space will be given for the writer’s preference, which has not always been presented adequately in other places.

The sons of God may very well be a reference to men like Lamech, in 4:23ff, who were the leaders of the day and were very wicked and violent. From a global perspective these would have been city-state or tribal chiefs, kings, sheiks, despots and tyrants. Reasons: (1) Elohim in Scripture is used in reference to human leaders in Ex 21:6; Ps 82:1. It is significant that in verse 6 Elohim (judges) is synonymous with bene‘elyon. Note, “I said, ‘Ye are gods and all of you children (sons) of the Most High!’” So one cannot say that sons of God is never used with reference to men in the Old Testament; (2) “son of” is an idiom, meaning to bear the character of someone or something. Thus, the judges in Israel were called sons of ( Elohim) God because they bore His character in judgment among the Israelites; … (4) the Aramaic targum Onkelos supports this view with sons of nobles, and so does Symmachus’ Greek translation (the sons of the kings or lords); (5) archaeology attests to the fact that a Near Eastern king would consistency be referred to as the son of his god (note: son of Re or Keret as Krt bn il = Keret, the son of the god); … and (9) the nepilim, in Arabic, means princes born into royal houses.

This view does the most justice to a grammatical, historical, and literal method of interpretation, in addition to the exegetical data; and it contains the fewest problems of all the views. Thus one would have the sons of God, that is mighty men, who were warriors and members of the aristocracy, engaged in worldwide violence and warfare.[4]

(v. 2): The sons of God (that is, the professors of religion, who were called by the name of the Lord, and called upon that name), married the daughters of men, that is, those that were profane, and strangers to God and godliness. The posterity of Seth did not keep by themselves, as they ought to have done, both for the preservation of their own purity and in detestation of the apostasy. They intermingled themselves with the excommunicated race of Cain: They took them wives of all that they chose. But what was amiss in these marriages?

And it came to pass, when men began to multiply on the face of the earth, and daughters were born unto them, That the sons of God saw the daughters of men that they were fair; and they took them wives of all which they chose [Gen. 6:1–2].

This matter of “the sons of God” and “the daughters of men” is something that hascaused no end of discussion. There are a great many good men who take the position that “the sons of God” were angels. I personally cannot accept that at all. Most of my teachers taught that the sons of God were angels, and I recognize that a great many of the present-day expositors take that position. However, I cannot accept that view, because, if these were good angels, they would not commit this sin, and evil angels could never be designated as “sons of God.” Also, the offspring here were men; they were not monstrosities. I do not know why it is assumed by so many that the offspring were giants.[6]

This article was written by The John Ankerberg Show staff in ©2001.