An Introduction to Biblical Prophecy | Part 1 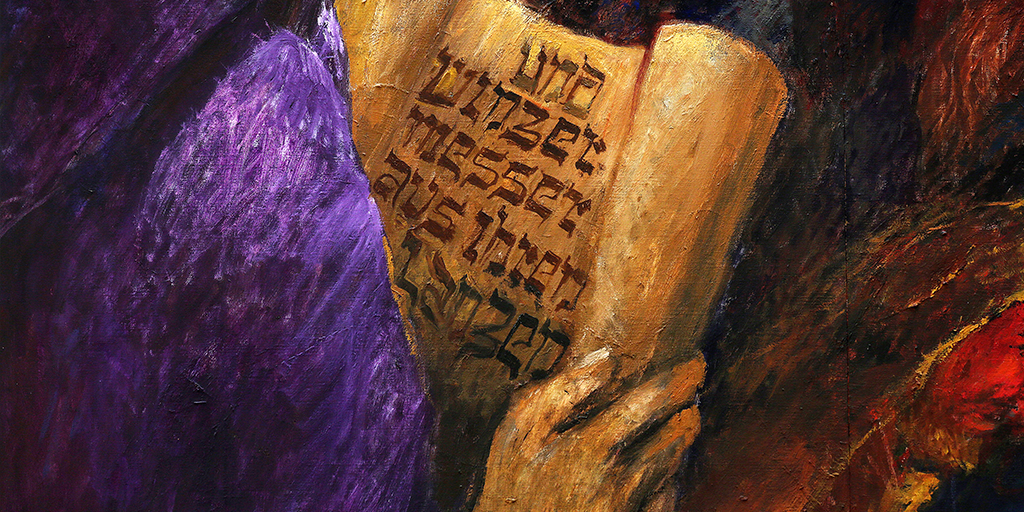 Someone once said, “We should all be concerned about our future because we will have to spend the rest of our lives there.”

In the movie version of H. G. Wells’ Time Machine, “George” (Rod Taylor) began an incredible journey that would transport him far into the future. If you watched that intriguing motion picture, perhaps you remember being captivated. As this intrepid adventurer sat in his time machine, he could literally view time passing by—the hours rolled into days, the days into years, the years into decades and the decades into centuries and hundreds of centuries. Because he was able to leap into the distant future, he could actually behold the “destiny” of humanity.

Perhaps some things we find impossible to fathom, let alone achieve, really are possible under different circumstances. For example, who would deny that God—if He chose—could transport people into the future and reveal to them what would happen? Jesus Himself once commented in a different context, “With man this is impossible, but not with God; all things are possible with God” (Mark 10:27, cf. Luke 1:37).

Perhaps the truth about “time travel” may be just as startling as in H. G. Wells’ novel. Perhaps a select few of history actually have been “transported into the future” so to speak—and lived to tell about it. In essence, this is just what God did with several biblical prophets and apostles. Ezekiel, Daniel, the apostle John, and others were each shown events that would take place in the future and/or at the end of the world. Impossible? The only question is whether the evidence for such a claim is convincing.

The writings of these prophets were “consistently oriented around predictive themes…. the prophets ‘regarded the foretelling of the future as of the essence of their function.’”[1]

For H. G. Wells, humanity’s future was both terrifying and hopeful. This is also the future of mankind seen by the biblical prophets. And this future may have more relevance to us personally than we think.

Who would deny that the future affects us all? Which man or woman alive would ever say his or her future was unimportant? This is why millions of people turn to astrologers and other diviners or fortunetellers—because they think such people can accurately predict their future or their destiny. (Unfortunately, such divinatory methods are not only unreliable, they are consequential. See our Encyclopedia of New Age Beliefs (Harvest House, 1996).)

On the other hand, the ancient Hebrew prophets made startling predictions about the future, predictions that should amaze anyone. Most of these predictions have already come true and there is no reason to believe that any of their prophecies will fail.

In the Bible, God clearly declares that He can accurately predict the future. Speaking through the prophet Isaiah, He made four startling statements:

First, God says that He alone is God and that what He predicts to happen, He will certainly bring to pass. “To whom will you compare me… that we may be compared?… I make known the end from the beginning, from ancient times, what is still to come. I say: My purpose will stand, and I will do all that I please.’… What I have said, that will I bring about; what I have planned, that will I do” (Isaiah 46:5, 10-11). Before such an event happens, God claims He has already announced it. “See, the former things have taken place, and new things I declare; before they spring into being I announce them to you” (Isaiah 42:9, emphasis added).

Second, God emphasizes that He has stated His predictions openly to the entire world and that what He speaks concerning the future is true and will certainly take place. By contrast, those who trust in false gods may claim to predict the future, but little evidence for such a claim has ever been forthcoming. God says:

I have not spoken in secret, from somewhere in a land of darkness;… I, the Lord, speak the truth;… Gather together and come; assemble, you fugitives from the nations…. who pray to gods that cannot save. Declare what is to be, present it —let them take counsel together. Who foretold this long ago, who declared it from the distant past? Was it not I, the Lord? And there is no God apart from me…. By myself I have sworn, my mouth has uttered in all integrity a word that will not be revoked. (Isaiah 45:19-23)

The religious world today offers men and women endless different gods to whom they may give their allegiance. But which god should they choose? How are they to know who the true God is? A central purpose of biblical prophecy is to show men and women who the one true God is,[2] “so that all the peoples of the earth may know that the Lord is God and that there is no other” (1 Kings 8:60; cf. verses 1-59):

…the fact of predictive prophecy brings, first of all, glory to God; for each prediction testifies to its Author’s wisdom and sovereignty over the future. As Isaiah spoke forth to the Israelites of his day, “Who hath declared it from the beginning, that we may say, He is right?”… Predictions point up His powers, as contrasted with those of any conceivable rivals;… When Joshua spoke out in faith and foretold the miracle of the cutting off of the waters of the Jordan (Josh. 3:13), he assured his people, “Hereby ye shall know that the living God is among you” (v. 10); and to this end the prediction itself contributed, just as did the subsequent miracle.[3]

Third, God Himself challenges people, including the alleged gods they trust, to compare His predictions with all others. Again, He teaches that His knowledge of the future is proof that He alone is the Lord. No one else has told of things to come (Isaiah 41:20-27).

God informs us that He has many witnesses to His predictions, and He emphasizes again and again that His prophecies of the future prove that He alone is God.

Because the false prophets and their gods cannot produce evidence for their claimed powers of prediction, God even mocks them:

All the nations gather together and the peoples assemble. Which of their gods foretold this and proclaimed to us the former things? Let them bring in their witnesses to prove they [the false prophets and gods] were right, so that others may hear and say, “It is true.” “You are my witnesses,” declares the Lord, “… so that you may know and believe me and understand that I am he. Before me no god was formed, nor will there be one after me. I, even I, am the Lord, and apart from me there is no savior…. You are my witnesses,” declares the Lord, “that I am God…. I am the Lord, the Maker of all things,… who foils the signs of false prophets and makes fools of diviners, who overthrows the learning of the wise and turns it into nonsense, who carries out the words of his servants and fulfills the predictions of his messengers….” (Isaiah 43:9-12; 44:24-26, emphasis added)

“…so that people may see and know, may consider and understand, that the hand of the Lord has done this,… Present your case,” says the Lord. “Set forth your arguments…. Tell us, you idols, what is going to happen…. Or declare to us the things to come, tell us what the future holds, so we may know that you are gods…. But you are less than nothing…. Who told of this from the beginning, so we could know, or beforehand, so we could say, ‘He was right’? No one told of this, no one foretold it, no one heard any words from you. I was the first to tell [you].” (Isaiah 41:20-24, 26, 27)

Why did God do all this? God did this so that even the skeptics and stubborn would have no excuse for rejecting His predictions.

I foretold the former things long ago, my mouth announced them and I made them known; then suddenly I acted, and they came to pass. For I knew how stubborn you were; your neck muscles were iron, your forehead was bronze. Therefore I told you these things long ago; before they happened I announced them to you so that you could not say, “My images [idols] did them”;… You have heard these things; look at them all. Will you not admit them? From now on I will tell you of new things, of hidden things unknown to you…. You have not heard of them before today. So you cannot say, “Yes, I knew of them.” (Isaiah 48:3-7)

Further, God emphatically warned men not to presumptuously speak of the future in his name: “But a prophet who presumes to speak in my name anything I have not commanded,, or a prophet who speaks in the name of other gods, must be put to death” (Deuteronomy 18:20).

When the people wondered how to discern whether God was the author of a prophetic message or not, He told them clearly: “You may say to yourselves, ‘How can we know when a message has not been spoken by the Lord?’ If what a prophet proclaims in the name of Lord does not take place or come true, that is a message the Lord has not spoken. That prophet has spoken presumptuously, so do not be alarmed” (Deut. 18:21-22, emphasis added).

Indeed, because of the consequences of leading people astray, God warns that He Himself will be against anyone who falsely claims to be His prophet. Obviously, this does not bode well for the many religious leaders today who falsely claim to be God’s prophet and to speak His words, Mormon “prophets” and the Watchtower Society of the Jehovah’s Witnesses being contemporary examples: “Their visions are false and their divinations a lie. Even though the Lord has not sent them, they say, ‘The Lord declares,’ and expect him to fulfill their words…. Therefore this is what the Sovereign Lord says: Because of your false words and lying visions, I am against you, declares the Sovereign Lord” (Ezekiel 13:6, 8).

But it is important to note that it is also possible that a false prophet can occasionally accurately predict the future or perform a miracle. These are counterfeit, i.e., demonic miracles, that originate from the supernatural world of lying spirits the Bible identifies as demons.

In these cases God instructs:

If a prophet, or one who foretells by dreams, appears among you and announces to you a miraculous sign or wonder, and if the sign or wonder spoken of takes place, and the prophet says, “Let us follow other gods” (gods you have not known) “and let us worship them,” you must not listen to the words of that prophet or dreamer….That prophet or dreamer must be put to death for inciting rebellion against the Lord your God,… (Deuteronomy 13:1-3, 5, emphasis added)

Again, the many false prophecies like those made by leaders in the Jehovah’s Witnesses and Mormonism prove that these religions are not from God. Their long history of opposition to God and His Word proves their allegiances lie elsewhere. Unfortunately, in offering false gods to others, they have preached rebellion against the one true God. (See our The Facts on the Jehovah’s Witnesses and Behind the Mask of Mormonism (Harvest House) for documentation and further study.)

Our discussion above proves that God does claim in the Bible that He accurately predicts the future. His predictions are to be judged on the basis of their accuracy and He emphasizes that His accuracy will be nothing less than 100%. God tells us His prophet is “recognized as one truly sent by the Lord only if his prediction comes true” (Jeremiah 28:9, emphasis added) because “whatever I say will be fulfilled, declares the Sovereign Lord.” (Ezekiel 12:28)