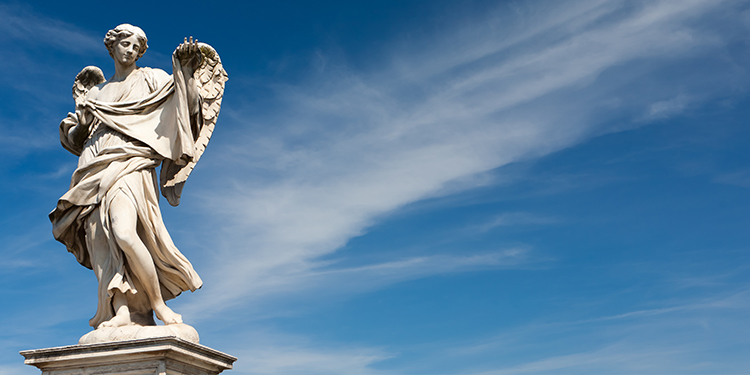 Like most religions,[1] Roman Catholicism has a long tradition of accepting angelic visitations. A common Catholic “prayer to your guardian angel,” which all devout Catholics learn, reads as follows: “Angel of God, my guardian dear, to whom his love commits me here, ever this day (night) be at my side, to light and guard, to rule and guide. Amen.”[2]

Officially, the Catholic church teaches that every person has a guardian angel, and that “the angel assigned to the person represents him before God, watches over him, defends, helps in prayer and in thought, and presents the soul of the just person to God after death. Devotion to one’s guardian angel is encouraged.”[3]

And, the Catholic Church is becoming more interested in angels. The Opus Sanctorum Angelorum (Work of the Holy Angels) of the Catholic Order of the Holy Cross is now accepted as an “institute recognized by the Church,” and Pope John Paul II has expressed a personal interest in angels.[4]

Many of the current books on angels are written by Catholics. In Where Angels Walk, a New York Times bestseller, Catholic Joan Anderson encourages a form of angel contact and prayers to angels. She writes, “Most Catholics believe that everyone receives a guardian angel at birth, a life companion especially suited to one’s unique personality. Catholic children learn a comforting little prayer to initiate ‘conversation’ with their angel and the feast day of guardian angels is celebrated on October 2.”[5]

Books such as W. Doyle Gulligan’s (ed.) Devotion to the Holy Angels (Lumen Christi, 1990), and Catholic organizations such as the OSA, cited earlier, explain and encourage devotion to angels along the lines of the popular angel phenomenon. For example, when two spiritists describe how to work with spirit guides in Companions in Spirit, they assert the following as justification for Catholics to contact spirits: “It should be noted, however, that the Catholic Church has long held to the propriety of praying for help from discarnates who have been elevated to sainthood…. Many saints and biblical figures have sought and received the advice of angels, who are master [spirit] guides of a high order. The Holy Spirit disseminates a multitude of emissaries, myriad varieties and degrees of ‘angel’ [sic]. They all come from the same source and lead back to the same destination. Their ultimate purpose is to help you grow toward God.”[6]

Nevertheless, revelations given by dead Catholic saints, by Mary, and by the angels frequently associated with her, support Catholic theology and teachings that are antibiblical.[7] For example, the occult Marian apparitions at Medjugorje, Yugoslavia, include the appearances of “putti” or child angels, whose messages deny the teachings of Jesus Christ.[8]

Spiritist and popular angel author Terry Lynn Taylor also argues that Catholic Marian devotion is connected with the resurgence of angels. “Mary, the Mother of Christ, is often referred to as the Queen of angels. Mary is touching the lives of those involved in angel consciousness in a deep way… that is why… the angels are so prevalent now.”[9]