Are UFOs Mentioned in the Bible? – Part 1 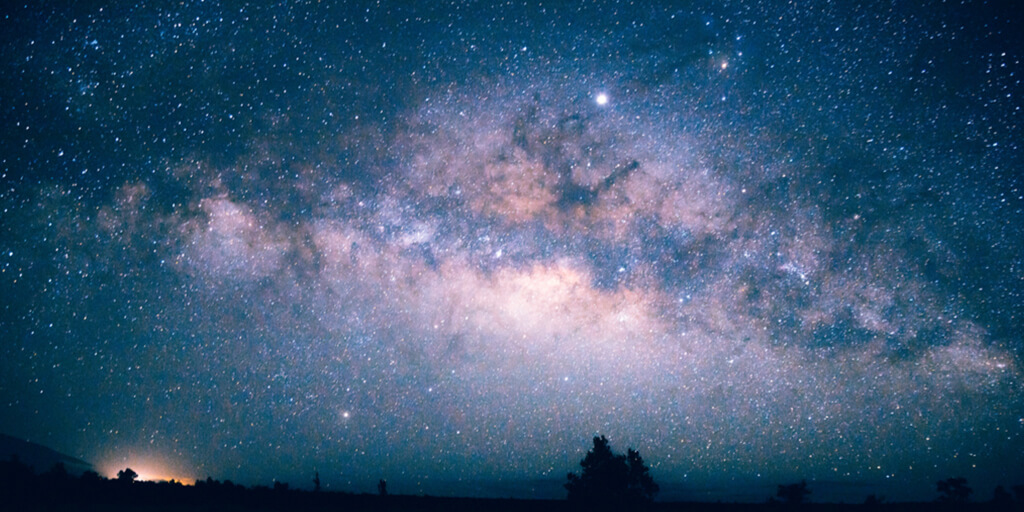 On the morning of the third day there was thunder and lightning, with a thick cloud over the mountain, and a very loud trumpet blast. Everyone in the camp trembled. Then Moses led the people out of the camp to meet with God, and they stood at the foot of the mountain. Mount Sinai was covered with smoke, because the LORD descended on it in fire. The smoke billowed up from it like smoke from a furnace, the whole mountain trembled violently, and the sound of the trumpet grew louder and louder. Then Moses spoke and the voice of God answered him. The LORD descended to the top of Mount Sinai and called Moses to the top of the mountain. So Moses went up.

Did Moses and the people of Israel encounter an extraterrestrial on Mount Sinai? Was this magnificent alien so resplendently glorious and powerful that the Israelites mistook it for being God? Do the mentions of thick smoke, fire, and loud sounds indicate that a starship landed on the mountain. To listen to many today, one would think so.

Erich von Daniken’s controversial book Chariots of the Gods has sold more than 45 million copies since its release in the late 1960s. Von Daniken argued that the Ark of the Covenant was a radio transmitter that enabled Moses to communicate with beings in a spaceship that guided the Israelites across the wilderness during the Exodus.

We are told that the Bible calls the spacecraft a “pillar of fire” by night and a “pillar of cloud” by day (Exodus 13:21-22; 14:19-20).[1] This brings to mind the movie Independence Day, for whenever alien spacecrafts showed up in earth’s atmosphere, they were accompanied by clouds and fire.[2]

A Presbyterian minister has suggested that the parting of the Red Sea was brought about by the exhaust pipe of an alien spacecraft. Moses needed help because the Egyptians were pursuing them. So, Moses quickly contacted the aliens with his radio transmitter (the Ark of the Covenant), and the aliens blew open a path through the Red Sea by the exhaust tailpipe of the ship.[3]

Others have suggested that Moses did not encounter God Almighty in the burning bush; rather, he came into contact with an exalted alien whose appearance was indescribably awesome. Von Daniken wrote a book entitled Was God an Astronaut? in which he argued that the various religions of humankind all arose from alien contact.[4] This, of course, effectively robs Christianity of everything miraculous.

Proponents of this theory assure us that God’s activities in the Bible do not require supernatural explanations. The so-called “miracles” and healings recorded in Scripture are nothing but practical and medical procedures devised by aliens that are so advanced that they appear miraculous in the context of our inferior and underdeveloped culture.[5]

Did Ezekiel Encounter a UFO?

Perhaps the most famous allegation of extraterrestrial contact in the Bible relates to Ezekiel 1. Consider these words:

I looked, and I saw a windstorm coming out of the north—an immense cloud with flashing lightning and surrounded by brilliant light. The center of the fire looked like glowing metal, and in the fire was what looked like four living creatures. In appearance their form was that of a man, but each of them had four faces and four wings…

As I looked at the living creatures, I saw a wheel on the ground beside each creature with its four faces. This was the appearance and structure of the wheels: They sparkled like chrysolite, and all four looked alike. Each appeared to be made like a wheel intersecting a wheel. As they moved, they would go in any one of the four directions the creatures faced; the wheels did not turn about as the creatures went. Their rims were high and awesome, and all four rims were full of eyes all around. (Ezekiel 1:4-6, 15-18)

Von Daniken and other UFO enthusiasts claim the Old Testament prophet Ezekiel saw a flying saucer. Ezekiel first beheld a windstorm out of the north. Then he saw wheels with perhaps rotating rims with lights that gave the appearance of having eyes all around the rim. We are told that Ezekiel saw resplendently beautiful aliens amid these starships.

While most scholars scoff at von Daniken’s suggestions, an engineer with the National Aeronautics and Space Administration became a believer. Josef F. Blumrich was initially skeptical, like other scholars. However, knowing something about spacecraft design, he determined that what Ezekiel described might, in fact, be a feasible design for landing modules from a mothership.

Blumrich worked out the design in detail and then published the results in a 1973 book entitled The Spaceships of Ezekiel. He concluded that the four “living creatures” may have been four sets of landing gear, each with a “wheel” to maneuver over the ground. The “wings” of each craft, he said, were probably similar to helicopter blades that were used for precision positioning before touchdown. A rocket engine on each craft explains the presence of fire.[6]

Christians believe in the biblical doctrine of the virgin birth. The Holy Spirit overshadowed Mary and supernaturally caused her pregnancy (Luke 1:35). The eternal son of God stepped out of eternity and into humanity via Mary’s womb.

Quite different is the explanation of some UFO enthusiasts. Some believe that aliens aboard a spacecraft injected Mary with the sperm of a space creature from another world. Others claim that the angel Gabriel of the gospels was an alien scientist who artificially inseminated Mary to create Jesus.[7] In such a scenario, of course, Mary can still be called a virgin since she had not had sexual relations with anyone. But there was no miracle, as orthodox Christianity has claimed since the first century.[8] Jesus was allegedly a mixed breed—part human and part alien.

Soon after the birth of Christ, aliens appeared to shepherds in a field to announce this extraordinary event.[9] Understandably, the shepherds mistook these glorious aliens for angels (compare with Luke 2).

Aliens were allegedly involved in other ways in the life of Christ. For example, we are told it wasn’t a “star of Bethlehem” that led the magi to the home of Jesus (Matthew 2:7). Rather, a spacecraft flying high in the atmosphere led the magi to Jesus’ dwelling place—just as a spacecraft had earlier led the Israelites in the wilderness as a “pillar of fire.”[10]

During Jesus’ baptism, the Spirit did not descend upon Jesus in the form of a dove, as Matthew 3 indicates. Rather, there was some kind of visible energy discharge from a spacecraft hovering in the sky that came upon Jesus.[11]

Nor did Jesus perform miracles among His people, as the New Testament claims. Aliens aboard UFOs were allegedly involved in all the works Jesus did on earth:

The Gospels relate many stories about how Jesus cured the crippled and the lame… These were not genuine miraculous cures… What actually took place was that extraterrestrials had previously hypnotized certain people so that their infirmities were psychosomatic. These apparently sick people were programmed to respond to the suggestions of Jesus that led to their being instantaneously healed.[12]

Sometime later, Moses and Elijah appeared to Jesus at the Mount of Transfiguration. UFO enthusiasts tell us that the mention of a “bright cloud” (Matthew 17:5) indicates that it was a spacecraft that served to transport Moses and Elijah to this mountain from a higher level of reality.[13] After their conversation with Jesus was over, they boarded the spacecraft and left the mountain.

When Jesus ascended into heaven, this also allegedly involved a spacecraft. The biblical text says, “After he said this, he was taken up before their very eyes, and a cloud hid him from their sight” (Acts 1:9). The means of being “taken up” was an alien ship of some type[14]—and, as is the case with other appearances of spacecrafts, clouds were present.

Some go so far as to say that Jesus was a participant in a grand experiment on humanity:

What if it turns out that the aliens are really the gods of the Bible? That is, the all-powerful beings who have been here before, done their thing, left, and now come back to throw their technological hat into the ring? Suppose they had been here two thousand years ago and had subsequently traveled at almost the speed of light so that time slowed down for them while it went on for the people they left behind? They might be the same beings who were here in Jesus’ time, and had left Jesus or other religious leaders behind and are now back to check on how things had gone.[15]

UFOs and the Transportation of Angels

Dr. Barry H. Downing, a clergyman, argues that UFOs are part of a “heavenly transportation system” carrying angels of God who interact among human beings. This is not something that can be proven, Downing concedes, but is something that must be accepted by faith.[16]

Downing believes that UFOs come from a parallel universe—“in the midst of us”—citing a statement by Jesus (Luke 17:21). The modern UFO mystery, in his view, is merely an extension of events depicted in the Bible and other historical reports showing that angels “are still with us, doing their shepherd work—by night and day.”[17]

Teaching on Hell from Aliens?

Some UFOlogists have claimed that some of the content of the Bible was brought to this planet by aliens. The doctrine of hell is an example:

Dr. Irwin Ginsburgh, a leading physicist, suggests that the biblical description of hell could well be a description of the Planet Venus, and a description transplanted to Planet Earth by space beings. It has been discovered that Venus has a seering atmosphere, with a surface heat of 850 degrees Fahrenheit. The planet is wreathed in dense sulfur clouds, with sulfuric acid droplets—liquid and solid, dripping from the clouds. Could our planetary neighbor be the origin of our hell? Dr. Ginsburgh thinks it could be.

It could be that knowledge of the surface conditions on Venus were communicated to primitive Earth people by extraterrestrials who showed them pictures of the planet’s surface… and the dark, glowing, searing hot and sulfurous 20 planet has been remembered—as hell.[18]

UFOs and the Emergence of Religion

As alluded to previously, many UFOlogists tie the emergence of religion on planet earth to UFO activity among human beings in the past. In ancient times, extraterrestrials might have been interpreted to be angels, gods, or God. We are told that all the gods of mythology were in reality extraterrestrial astronauts.[19]

“Whatever the visitors are,” abductee Whitley Strieber writes in Transformation, “I suspect they have been responsible for much paranormal phenomena, ranging from the appearance of gods, angels, fairies, ghosts, and miraculous beings to the landing of UFOs in the backyards of America.” If this is the case, then, in Strieber’s words, “we may very well be something different from what we believe ourselves to be, on this earth for reasons that may not yet be known to us, the understanding of which will be an immense challenge.”[20]

Part 2 will answer the question: Are UFOs Really in the Bible?