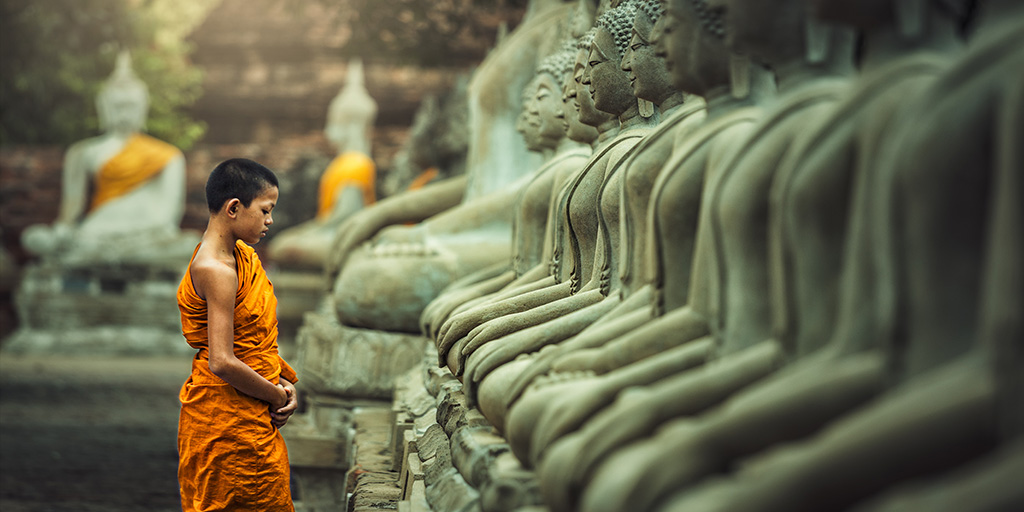 As a whole, Buddhism has little directly to say about Jesus Christ. It does acknowledge what most men do: that He was a great person. For the most part, however, His Gospel teachings are largely ignored and a more convenient Jesus is accepted: one who, along with the Buddha, smiles serenely.

But on the other hand, there is a sense in which Buddhism explicitly rejects Jesus Christ. What Christian belief in a personal Savior from sin represents to Buddhism is a serious form of personal ignorance. Personal Savior? No “person” exists. So what is there to save? And no genuine Savior can exist either, for we must ultimately save ourselves. The central message of Christianity (Jn. 3:16) is thus dismissed as remnants of beclouded consciousness.

Although ecumenically minded people would find it difficult to accept, the Jesus Christ of history is not merely un-Buddhist; He is anti-Buddhist. If we could bring Jesus and Buddha together for a discussion, neither Jesus nor Gautama would find the other’s worldview acceptable. According to Christ, Buddha would certainly not have been spiritually enlight­ened—far from it. His rejection of a creator God would classify him as a pagan unbeliever, however adept he was at philosophical speculation. “The fool has said in his heart, there is no God” (Ps. 14:1). Such a man would need repentance and faith in the one true God (Jn. 17:3). In other words, Jesus’ view of Buddha is that he would require salvation—just like everyone else.

And conversely, Buddha would have no need for Christ as Savior, for Buddha taught total, unswerving self-reliance. Compare this with Jeremiah 17:5—“Cursed is the man who trusts in mankind and makes flesh his strength and whose heart turns away from the Lord.” Thus, in discussing Buddhism’s appeal to modern man, Stephen Neill is correct in observ­ing that this appeal is based squarely upon prideful self-sufficiency:

For the modern man one of the most attractive things in this scheme is that in it he is entirely cast back upon himself. ‘Therefore, O Ananda, take the self as a lamp; take the self as a refuge. Betake yourselves to no external refuges. Hold fast as a refuge to the truth. Look not for refuge to anyone besides yourself. Work out your own salvation with diligence.’ So the Maha-Parinibbana-Sutta, one of the most famous of Buddhist classics….The Buddha attained to enlightenment by his own intense concentration; he called in no help from any god or savior. So it must be with the disciple. God has been abolished, at least as far as any possibility of a practical relationship to him is concerned. There is no hope for a man outside of himself—or rather in his inner apprehension of the meaning of the Buddha, the Law and the Order. ‘Man for himself.’ That is the modern mood. The last thing that a modern man desires is to be told that he needs to be saved, or that he requires the help of a savior…. So naturally Buddhism has attractive power…. [1]

Whereas Theravada views the Buddha as an enlightened man (more enlightened, no doubt, than the biblical Christ, but still a man), Mahayanists have placed Buddha on the level of a divine being who rivals Christ in his deity, although still falling far short of the biblical concept.

To go to him for refuge, to praise and to honor him, to abide in his religion, that is fit for those with sense. The only Protector, he is without faults or their residues; The all-knowing, he has all the virtues, and that without fail. For even the spiteful cannot find with any justice any fault in the Lord—in his thought, words or deeds.[2]

The Lotus Sutra (Saddharmapundarika) says of him “He thus becomes the Saviour of the world with its Gods” (XXIV, 17). [3]

Finally, in the area of miraculous, we find another disagreement with Christian faith: “It may be fairly said that Buddhism is not a miraculous religion in the sense that none of its central doctrines depend on miracles.” [4]

In conclusion, Buddha and Jesus are not just a little bit short of being friends. The suffer­ing and exaltation of Christ is hardly equivalent to the serene peacefulness of the Buddha entering nirvana. Jesus came to save the world, not himself (Jn. 12:27). Indeed, Jesus said, “He that would save his life will lose it” (Mt. 16:25). He obeyed and glorified the very God whom Buddha contentedly rejected (Jn. 17:4).