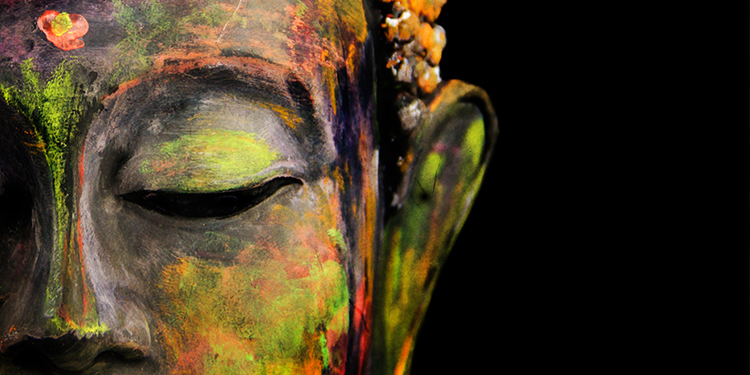 Zen does not hold that there is a god apart from the universe who first created this universe and then created man to enjoy, or even master it…. Rather, Zen holds that there is no god outside the universe who has created it and created man. God—if I may borrow that word for a moment—the universe, and man are one indissoluble existence, one total whole. Only THIS—capital THIS—is. Anything and everything that appears to us as an individual entity or phenomenon, whether it be a planet or an atom, a mouse or a man, is but a temporary manifestation of THIS in form.[1]

Zen masters may argue they are not atheists since they stress neither belief in God nor disbelief in God. “Is God dead or not? That is the most serious question of all. If you say yes or no, you lose your own Buddha-nature.”[2] Lassalle claims: “No understanding Zen master will attack the Christian’s faith in God. In most cases, the Zen master himself will not be an atheist. Nevertheless, he will forbid that his disciple think of God, that is think about God as one usually does…. A Zen master once told his Christian disciple that his idea of God might change after he was enlightened. He did not say that the Christian would or should give up his belief in God.”[3]

But Lassalle ignores the fact that this is often exactly what happens. Zen masters do attack the Christian’s faith in God because in Zen the very concept of God in Christianity is a delusion preventing enlightenment.

Dr. Lit-Sen Chang was a practitioner of Zen for 50 years before his conversion to Christ. He declares in no mistakable terms that “Zen is a very peculiar and subtle form of atheism.”[4] In fact, the practical atheism of Zen is part of its appeal. Westerners or skeptics who have felt themselves “burdened” with a Judeo-Christian concept of God have converted to Zen for just this reason, to “give up belief in God” and live as they wish. Herbert Benoit noted that “Zen demonstrates the nullity of all belief in a personal God, and the deplorable constraint that necessarily flows from this belief.”[5] In a telling statement Alan Watts commented:

Above all, I believe that Zen appeals to many in the post-Christian West because it does not preach, moralize and scold in the style of Hebrew-Christian prophetism…. Absolute morality is profoundly destructive of morality, for the sanctions which it invokes against evil are far, far too heavy…. The appeal of Zen, as of other forms of Eastern philosophy, is that it unveils behind the urgent realm of good and evil a vast region of oneself about which there need be no guilt or recrimination, where at last the self is indistinguishable from God. But the Westerner who is attracted by Zen… must really have come to terms with the Lord God Jehovah and with his Hebrew-Christian conscience so that he can take it or leave it without fear or rebellion.[6]

In another telling statement, Dr. Lit-Sen Chang describes the beliefs of D. T. Suzuki and Christmas Humphreys (Zen Comes West) and then quotes them as declaring that both God and salvation by faith alone must be abandoned by Westerners:

On the other hand, they not only deny the existence of a living personal God, but rather deify themselves by asserting blasphemously that, ‘Before Abraham was I am’; and ‘I am the way.’ They consider that a greater stumbling block to the acceptance of Zen is the general belief in God…. We are told that ‘Zen practice has no use for God. Look to no person or Person or God for help.’ In the West it is necessary to remove the personal God-concept and all that implies of salvation by faith alone. [7]

The truth is that Zen does attack God, precisely because it understands the implications of belief in the Christian God. Werner Erhard, founder of the Zen driven est/The Forum declares that “the greatest single barrier to God is belief in God.” (See Encyclopedia of New Age Beliefs, “est, The Forum.”) The famous psychoanalyst Erich Fromm observes that in Zen, “I truly follow God’s will if I forget about God.” [8]

In light of all these denials of God, how is it that Zen is neutral toward God, does not disbelieve in God and should not be considered a form of atheism?

Zen’s “theological equivalent” for God is the state of satori or void. The state of “unknowing,” the void, is the only truth and the only “God” As noted, while Zen denies the existence of the Christian God, it will use the term God to describe Zen meditation, enlightened Zen practices and the state of satori itself. Consider Deshimaru’s response to the following comment: “[Student:] A Zen monk said to me, ‘In Zen, when you have satori, you can say, “I am God!”’ [Deshimaru:]…. Zazen is the same thing as God or Buddha. Gogen, the master of transmission, said, ‘Zazen itself is God.’ By that he meant that during zazen you are in harmony with the cosmos…. The self has dropped away and dissolved. It is the consciousness of God. It is God…. We are not separate. There is no duality between God, Buddha, and ourselves.”[9] Shunryu Suzuki asserts that we are the ones who create the world,[10] while God does not help people at all because “how is it possible for Him to help when He does not realize who He is?”[11] Suzuki tells us that “the kokoro… is an abyss of absolute nothingness…. In Western terminology, the kokoro may be regarded as corresponding to God or Godhead,”[12] even as Huang Po asserts that “of the absolute nothing whatever can be postulated.” [13]

Zen involves idolatry. Everyone worships something in life. Zen rejects worship of the living God but replaces it with prostrations before the Zen master and the worship of Buddhist idols. Indeed, it seems that the lotus position itself indirectly assists in the endeavor. “The fact is that this lotus position somehow impedes discursive reasoning and thinking; it somehow checks the stream of consciousness that flows across the surface of the mind; it detaches one from the very process of thinking.”[14] With one’s mind sufficiently placed to the side, one suspects that worship of the Zen Master as the personification of the Buddha is thereby made all the easier. Yasutani Roshi tells aspiring Zenists:

While everyone is free to practice zazen and to listen to the roshi’s commentary at sesshin, the essential character of dokusan [the meeting] is the forming of a karmic bond between teacher and disciple, the significance of which is deep in Buddhism. Dokusan therefore is not to be taken lightly…. In making your prostrations you should touch the tatami mat with your forehead, with your hands extended in front of your head, palms upward. Then, bending your arms at the elbows, raise your hands, palms upward, several inches above your head. This gesture of receiving the feet, the lowliest members of the Buddha’s body, symbolizes humility and the grateful acceptance into your life of the Way of the Buddha…. Bear in mind that the roshi is not simply a deputy of the Buddha but actually stands in his place. In making these prostrations you are in fact paying respect to the Buddha just as though he himself were sitting there, and to the Dharma.[15]

In fact, proper Zen practice provides aspirants with a natural spirit of worship:

[It is] appreciation of the exalted mind and manifold virtues of the Buddha and the Patriarchs. So there arises within us a desire to express our gratitude and show our respect before their personalized forms through appropriate rituals. These devotions when entered into with a single mind endow the Buddha figure with life; what was formerly a mere image now becomes a living reality with the singular power to obliterate in us awareness of self and Buddha at the moment of prostration.[16]

One Western Zen aspirant recalls his initial recoiling at such idolatry:

What a weird scene of refined sorcery and idolatry: shaven-headed black-robed monks sitting motionlessly chanting mystic gibberish to the accompaniment of a huge wooden tom-tom emitting other-worldly sounds, while the roshi, like some elegantly gowned witch doctor, is making magic passes and prostrating himself again and again before an altar bristling with idols and images…. Is this the Zen of Tanka, who tossed a Buddha statue into the fire? Is this the Zen of Rinzai, who shouted “You must kill the Buddha?”…. If only he doesn’t mar it all by insisting we bow down before those images in the halls. O my prophetic soul!… He’s brought us into the founder’s room and is lighting incense and fervently prostrating himself before a weird statue of Kakuin…. “You too may light incense and pay your respects to Kakuin.” P___ looks at me and I at him, then he explodes: “the old Chinese Zen masters burned or spit on Buddha statues, why do you bow down before them?”… The roshi looks grave but not angry. “If you want to spit you spit, I prefer to bow”,… We don’t spit, but neither do we bow.[1]

But his resistance did not last. Within several weeks this same person records in his diary how he was gladly worshipping a statue of Buddha as God. “Around midnight I prostrated myself before statue of Buddha in main hall and desperately prayed: ‘O God, O Buddha, please grant me satori and I’ll be humble, even bowing willingly before you.’”[17]