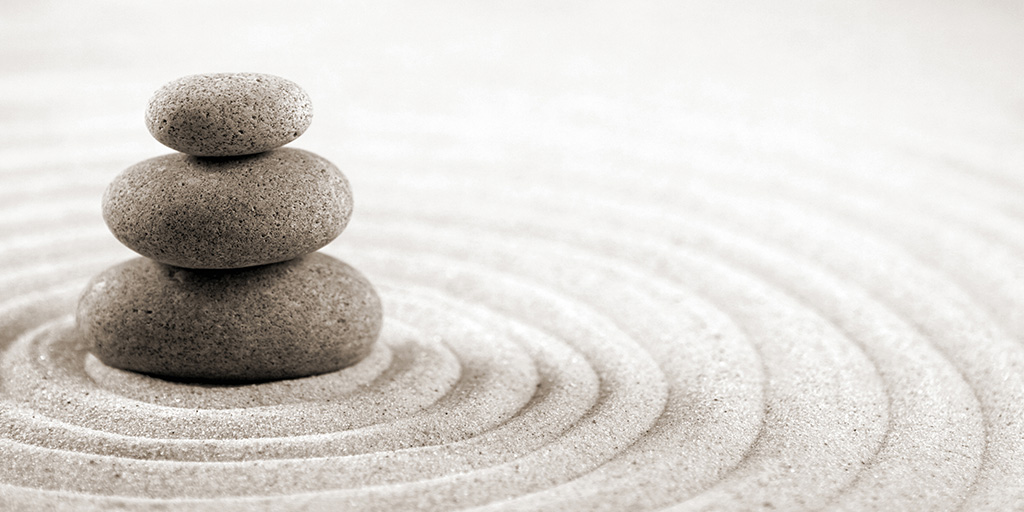 In order to attain enlightenment, Bodhidharma, the “founder” of Zen, purportedly sat before a wall for nine years without speaking to anyone![1] One can honestly wonder if he felt the effort was worth it? (Following his example, Soto Zenists face a wall or curtain during zazen.) Nevertheless, Zen both denies salvation (or enlightenment) and affirms it.

No one needs salvation. We are perfect just the way we are; we simply do not realize it yet:

If I believe that I must achieve my “salvation” I cannot avoid believing that I must lead others to do the same…. The refutation of this error that we are here studying is perfectly expounded in Zen, and as far as we know, nowhere perfectly but there. Zen tells man that he is free now, that no chain exists which he needs to throw off; he has only the illusion of chains. Man will enjoy his freedom as soon as he ceases to believe that he needs to free himself, as soon as he throws from his shoulders the terrible duty of salvation. [2]

In order to realize the truth, all one need do is Zen practice, accepting whatever is prescribed by the Zen masters.

Salvation is mystical. “Awakening is to know what reality is not. It is to cease to identify with any object of knowledge whatsoever.”[3]

Shunryu Suzuki refers to the necessity of “great pure effort,” that “the most important point in our practice is to have right or pure effort. Right effort directed in the right direction is necessary.”[5] Paradoxically, he also declares: “If it [Buddhism] is unattainable, how can we attain it? But we should! That is Buddhism…. Even though it is impossible we have to do it.”[6] Regardless, “it is the effort to improve ourselves that is valuable. There is no end to this practice.”[7]

Ruth Fuller Sasaki, the Director of the First Zen Institute of America in Japan, refers to the “hours and hours of meditation upon koan after koan for years and years,” noting that “the treasure of Truth lies deep within the mind of each one of us; it is to be awakened or revealed or attained only through our own efforts.”[8] D. T. Suzuki informs us that, even though there is no mind: “A thoroughgoing enlightenment, however, is attained only through the most self-sacrificing application of the mind, supported by an inflexible faith in the finality of Zen…. The necessary requirements are faith and personal effort, without which Zen is mere babble. Those who regard Zen as speculation and abstraction will never obtain the depths of it, which can be sounded only through the highest willpower.” ,ref name=”ftn9″> Suzuki, “the Koan,” in Ross, p. 56.</ref> According to Shibayama, “there is not a single case where one is enlightened without going through the hard and difficult training process.” [9] Regardless, Zen simultaneously undermines its great efforts toward enlightenment. In the words of Deshimaru, “In Zen you must have no goal.”

Clearly this is not the biblical teaching of salvation as a free gift of God’s grace through faith in Jesus Christ:

“For God so loved the world that he gave his one and only Son, that whoever believes in him shall not perish but have eternal life” (John 3:16).

“For it is by grace you have been saved, through faith—and this not from yourselves, it is the gift of God—not by works, so that no one can boast” (Eph. 2:8-9).

“He saved us, not because of righteous things we had done, but because of his mercy. He saved us through the washing of rebirth and renewal by the Holy Spirit” (Titus 3:5).

Zen believers reject the atonement of Christ due to Zen philosophy. First, individual spirit, the body and the personality are not real, so no person exists to be saved. Second, the true Self in Zen is already perfect, so it cannot require salvation. Third, sin is an illusion, so no atonement for sin is possible. Indeed, Jesus and His atonement are as much an illusion as anything else. Fourth, as human personality is an illusion, it hardly benefits from the atonement of Christ, which bestows personal immortality. Dr. Tucker Callaway observes, “The farther a man walks the Zen Way, the more completely all individuality is erased; the farther a man walks the Jesus Way, the more his individuality is sharpened.” [10]

In essence, the Christian concept of the salvation of souls is a myth because there are no souls to save. “Naturally we cannot believe that each individual person has been endowed with a special and individual soul or self. Each one of us is a cell as it were in the body of the Great Self.”[11] Alan Watts quotes Sokei-an Sasaki, illustrating how satori obliterates Christian teachings: “One day I wiped out all the notions from my mind…. I felt a little queer—as if I were being carried into something, or as if I were touching some power unknown to me… and Ztt! I entered. I lost the boundary of my physical body…. I had never known this world. I had believed that I was created, but now I must change my opinion: I was never created; I was the cosmos; no individual Mr. Sasaki existed.” [12]

Since there really are no parts of the whole (“parts” are the whole), the Zenist can sincerely proclaim “I AM the absolute” or “I AM God.” [13] “It is incorrect to employ such mystical terminology as ‘I dwell in the Absolute,’ ‘The Absolute dwells in me’ or ‘I am penetrated by the Absolute,’ etc.; for, when space is transcended, the concepts of whole and part are no longer valid; the part is the whole—I AM the Absolute, except that I am no longer ‘I.’ What I behold then is my real Self, which is the true nature of all things.” [14] Thus, “In this state… I, selfless, I am supreme.”[15] “In the whole universe I am supreme, and it is perfectly natural.”[16]

Despite Zen’s “death” to the ego, many adherents love to bask in the glory of their new- found “Self.” After all, if their true nature is supreme; why shouldn’t they exalt it? But this easily becomes another trap. In another of Zen’s paradoxes, even enlightenment can bring delusion that Zenists may find difficult to avoid. “An ancient Zen saying has it that to become attached to one’s own enlightenment is as much a sickness as to exhibit a maddeningly active ego. Indeed, the profounder the enlightenment, the worse the illness…. My own sickness lasted almost ten years. Ha!” [17]

In Zen, one need not be humbled by looking to a Savior apart from oneself; one need only look to one’s own “real” Self. There one will find true glory because the Zenist himself is the Savior of the world. This is why Zen literature contains references to the Zenist being the “savior” of all. Again, this is not meant in the sense that a Christian would conceive it, since in Zen no individual exists to save. Rather, the individual Zenist is the Savior of the world as soon as he realizes enlightenment, because he knows that all beings are already saved.

This discussion explains why Buddhists generally cringe at the thought of the Cross. Of necessity, the Buddhist must be fundamentally opposed to the Christian concept of redemption. The premise of the atonement, the very means by which God redeems man, involved horrible suffering, but this is something followers of the Buddha cannot accept. At all costs, the Buddhist seeks to escape suffering, not contemplate it or embrace it. Thus, he must not look at the Cross, and he certainly must not accept the platform from which to speak about ignorant concepts such as divine holiness or judgment on sin. Thus the image of the Cross, as well as the sacrament of communion—the perpetual reminders of Jesus’ sacrifice—must be forsaken for the vastly “more enlightened” truth of impermanence and nirvana. When D. T. Suzuki contemplates the Cross he comments:

To the Oriental mind, the sight is almost unbearable…. The crucified Christ is a terrible sight and I cannot help associating it with the sadistic impulse of a psychically affected brain…. To think that there is a self is the start of all errors and evils…. As there is no self, no crucifixion is needed…. What a contrast between the crucifixion image of Christ and the picture of Buddha…. In these respects, Buddhism proves to be just the opposite of Christianity. [18]

The rotund Buddha smiles serenely from the lotus position; the tormented Jesus screams in agony from a bloody cross. Opposite worldviews are indeed clearly seen. Of course biblical Christianity is repulsive to the Zenist or Buddhist. Of course it agitates and disturbs. For it has a supreme deity—an infinite, personal, triune God—and this God actually incarnates and suffers to redeem individual people.

Buddhists do their best and go to great lengths to achieve the elimination of suffering. How easy then to not even consider the story of the suffering God and the Cross. Unfortunately, in forsaking everything to end suffering, the Buddhist only guarantees his own suffering. In deliberately rejecting the way of the Cross (faith that God has already endured the suffering for us) for the way enlightenment (faith in one’s own ability to end suffering), the result is, biblically, the assurance of eternal suffering. The Buddhist “finds his life”—his concern is with his own Self, his own contentment—he thereby loses it. But Jesus says that the person who loses his life for His sake will find it (Matt. 16:25).

Again, in Zen, the atonement of Christ is as much an illusion as anything else. Only to unenlightened eyes does it appear that Jesus sacrificed Himself on the Cross. As Yasutani Roshi informs us, “There is no real sacrifice.” [19]

In Zen, death and judgment are unreal. If there is no soul and if all is one, there can be no death or judgment in biblical terms. “What we see is illusory, without substance, like the antics of puppets in a film. Are you afraid to die? You need not be. For whether you are killed or die naturally, death has no more substantiality than the movements of these puppets.” [20] “Our life and death are the same thing. When we realize this fact we have no fear of death anymore, and we have no actual difficulty in our life.” [21]

Although no individual soul exists to reincarnate, Zen nevertheless believes in reincarnation. Yasutani-Roshi even notes that Shojo Zen promotes a way of meditation- induced suicide to escape rebirth. “With practice this power can be cultivated by anyone. In case there is no wish to die one can enter this trance-like state for a limited period—say an hour or two or one or two days—or one can remain in it indefinitely, in which event death follows naturally and painlessly, without—and this is most important—rebirth. This entire process of death without rebirth is set forth in great detail in a Buddhist philosophical work called the Kusharon.” [22]

Logically, Zen should not teach belief in personal immortality. Still, some Zenists are agnostic on the issue, perhaps reflecting a desire to escape the despair that Zen leaves one within its denial of personal immortality. Thus, for Yasutani-Roshi the question of whether there is personal survival beyond death “ultimately has no answer.” [23]