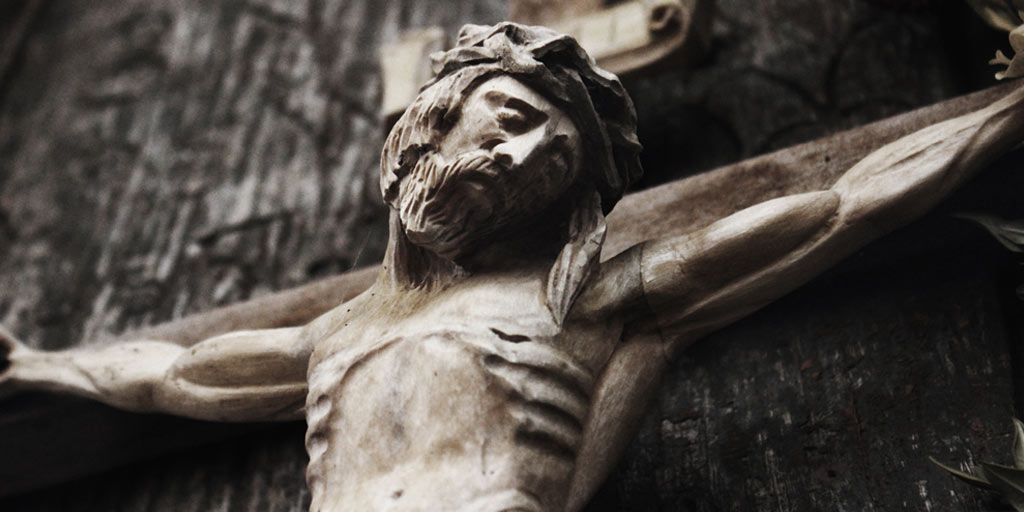 How Did Roman Crucifixion Kill Jesus?

Crucifixion seems to have been invented by the Persians, who transmitted it to the Carthaginians, from whom the Romans learned it. It was the ultimate Roman punishment for slaves and provincials, but it was not used for Roman citizens. It was one of the most horrifying forms of execution ever devised. After having been stripped and flogged, the victim was lashed and/or nailed to a pole. John 20:25

). Evidently there were different styles of crosses including a single upright pole and two crossed poles in the form of an X, but the most common seems to have been a vertical pole and a horizontal one in the form of a T with the crossbar either at the top or near the top of the vertical piece. The usual practice was for the condemned to carry the crossbar to the place of execution where he was affixed to it and where it was hoisted upon the vertical stake that was permanently fixed. Death usually came slowly as a result of exposure and exhaustion. Inasmuch as no vital organ was damaged, it often took two or three days for the subject to die, although death could be hastened by breaking the legs (cf. John 19:31–33

Norman Geisler writes in the Baker Encyclopedia of Christian Apologetics:

The nature of the crucifixion assures death. . . . Jesus hung on the cross from 9 in the morning until just before sunset (Mark 15:25

). He bled from gashes in his hands and feet and from the thorns that pierced his scalp. These wounds would have drained away much blood over more than six hours. Plus, crucifixion demands that one constantly pull up by the hands and push on the injured feet in order to breathe. This caused excruciating pain from the nails. . . .

Beyond these injuries, Jesus’ side was pierced with a spear. From this wound flowed a mixture of blood and water (John 19:34

), a proof that physical death had occurred. This detail alone, and its confirmation by modern medical experts, strongly validates the claim that this narrative is an eyewitness account. An article in the Journal of the American Medical Association (21 March 1986) concluded:

‘Clearly, the weight of historical and medical evidence indicates that Jesus was dead before the wound to his side was inflicted and supports the traditional view that the spear, thrust between his right rib, probably perforated not only the right lung but also the pericardium and heart and thereby ensured his death. Accordingly, interpretations based on the assumption that Jesus did not die on the cross appear to be at odds with modern medical knowledge.’

Jesus said he was dying when he declared on the cross, ‘Father, into your hands I commit my spirit’ (Luke 23:46

The Roman soldiers, accustomed to crucifixion and death, pronounced Jesus dead. Although it was a common practice to break the legs of the victim to speed death (so that the person could no longer breathe), they did not believe it necessary to break Jesus’ legs (John 19:33

Pilate double-checked to make sure Jesus was dead before he gave the corpse to Joseph to be buried. ‘Summoning the centurion, he asked him if Jesus had already died. When he learned from the centurion that it was so, he gave the body to Joseph’ (Mark 15:44–45

Jesus was wrapped in about 100 pounds of cloth and spices and placed in a sealed tomb for three days (Matt. 27:60

). If he was not dead by then, the lack of food, water, and medical treatment would have finished him.

There is simply no way that Jesus did not die on the cross. But let’s pretend that somehow he was only near death when he was put in the tomb. What would have happened next? Michael Licona, in The Resurrection of Jesus, describes the scene:

D. F. Strauss’s critique is every bit as pertinent today as it was on the day he offered it. He asked us to suppose that a man was removed from his cross half dead, buried in a tomb and somehow reenergized after a few days. Having awakened from his stupor and wanting out of the dark tomb, he places his nail-pierced hands on the very heavy stone blocking his entrance and pushes it out of the way. He then walks blocks on pierced and wounded feet in search of his disciples. Finally, he arrives at the place they are staying and knocks on the door, which Peter opens only to see a severely wounded and dehydrated Jesus who is hunched over and looks up at Peter and through his extreme pain grimaces and says, ‘I’m the firstfruits of the general resurrection!’ Such a Jesus would never have convinced his disciples that he was the risen prince of life. Alive? Barely. Resurrected? Never. Allison comments, ‘How a flagellated, half-dead victim of the hideous torture of crucifixion could impress others as triumphant over death is hard to envisage.’

This article was used with the permission of www.toughquestionsanswered.org, and was published by Bill Pratt on April 26, 2017.