How Long Were the Days of Genesis 1-2? | John Ankerberg Show
Donate 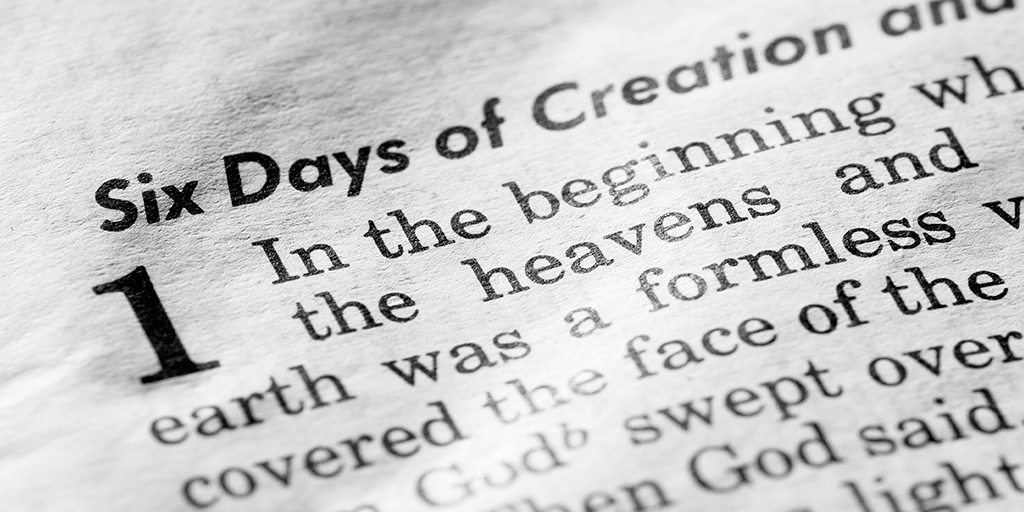 How Long Were the Days of Genesis 1-2?

There are two major views with regard to the time involved in Creation: the old-earth view and the young-earth view. The latter believes the universe is no more than approximately 15,000 years old, while the former holds that it is probably about 13.7 billion years old.

Young-earthers take the “days” of Creation to be six successive, literal, solar days of twenty-four hours each, totaling 144 hours of Creation. They also reject any significant time gaps between the accounts in Genesis 1 or within the genealogies in Genesis 5 and 11.

The Six Twenty-Four-Hour-Day View of Creation

Not all scholars who take the days of Genesis to be twenty-four hour days are young-earthers (some hold a gap theory); however, all who hold to a young earth hold to the twenty-four-hour-day view.

There are many biblical arguments presented in favor of the twenty-four-hour-day position. We will list several of those arguments below.

In spite of the fact that many find these arguments convincing proof of six succes­sive twenty-four-hour days of Creation, the case is less than definitive for several reasons.

Following each argument for the twenty-four-hour-day position, we will present a response from those who reject the six-successive-solar-day view.

I. The Normal Meaning of the Word Day (Yom)

Argument: It is contended that the usual meaning of the Hebrew word yom (“day”) is twenty-four hours unless the context indicates otherwise. The context does not indicate anything but a twenty-four-hour day in Genesis 1; hence, the days should be taken as solar days.

Response: It is true that most often the Hebrew word yom (day) means “twenty­four hours.” However, this is not definitive for its meaning in Genesis 1 for several reasons. First, the meaning of the term is not determined by a majority vote but by the context in which it is used. It is not important how many times it is used else­where but how it is used here. Second, even in the Creation story in Genesis 1-2, “day” (yom) is used of more than a twenty-four hour period. Speaking of the whole six days of Creation Genesis 2:4 refers to it as “the day” (yom) when all things were created. Third, and finally, yom is elsewhere used of long periods of time as in Psalm 90:4, which is cited in 2 Peter 3:8: “A day is like a thousand years.”

II. The Use of Numbered Series

Response: Critics of the twenty-four-hour-day view point out that there is no rule of the Hebrew language demanding that all numbered days in a series refer to twenty-four-hour days. Further, even if there were no exceptions in the Old Testa­ment, it would not mean that “day” in Genesis 1 does not refer to more than a twenty-four-hour period of time: Genesis 1 may be the exception! Finally, contrary to the solar-day view, there is another example in the Old Testament of a numbered series of days that are not twenty-four-hour days. Hosea 6:1-2 reads: “Come, let us return to the LORD. He has torn us to pieces but he will heal us; he has injured us but he will bind up our wounds. After two days he will revive us; on the third day he will restore us, that we may live in his presence.” It is clear that the prophet is not speak­ing of twenty-four-hour “days,” but of longer periods of time in the future. Even so, he uses numbered days in a series.

III. The Use of “Evening and Morning”

Argument: Another line of evidence is the use of the phrase “evening and morn­ing” in connection with each day in Genesis 1. Since the literal twenty-four-hour day on the Jewish calendar began in the “evening” (by sunset) and ended in the “morn­ing” (before sunset) the next day, it is concluded that these are literal twenty-four ­hour days.

Response: First, the fact that the phrase “evening and morning” is often used in connection with twenty-four-hour days does not mean it must always be used in this way. Second, if one is going to take everything in Genesis 1 in a strictly literal way, then the phrase “evening and morning” does not encompass all of a twenty-four-hour day, but only the late afternoon of one day and the early morning of another. This is considerably less than twenty-four-hours. Third, technically, the text does not say the “day” was composed of “evening and morning” (thus allegedly making a twenty-four­hour Jewish day); rather, it simply says, “And there was evening, and there was morning – the first day” (Gen. 1:5). Further, the phrase may be a figure of speech indicating a beginning and end to a definite period of time, just as we see in phrases like “the dawn of world history” or the “sunset years of one’s life.” Fourth, if every day in this series of seven is to be taken as twenty-four hours, why is the phrase “evening and morning” not used with one of the days (the seventh)? In fact, as we shall see (below), the seventh day is not twenty-four hours, and thus there is no necessity to take the other days as twenty-four hours either, since all of them alike use the same word (yom) and have a series of numbers with them. Fifth, and finally, in Daniel 8:14 “evenings and mornings” refer to a period of 2,300 days. Indeed, often in the Old Testament the phrase is used as a figure of speech mean­ing “continually” (cf. Ex. 18:13; 27:21; Lev. 24:3; Job 4:20).

IV. The Comparison with a Six-Day Workweek

Argument: According to the Law of Moses (Ex. 20:11), the Jewish workweek (Sunday through Friday) was to be followed by a day of rest on Saturday, just as God had done on His “six-day week” of creation. The Jewish workweek refers to six successive twenty-four-hour days. This being the case, it seems that the creation week, like the workweek, was only 144 hours long.

Response: It is true that the creation week is compared with a workweek (Ex. 20:11); however, it is not uncommon in the Old Testament to make unit-to-unit com­parisons rather than minute-for-minute ones. For example, God appointed forty years of wandering for forty days of disobedience (Num. 14:34). And, in Daniel 9, 490 days equals 490 years (cf. 9:24-27). What is more, we know the seventh day is more than twenty-four hours, since according to Hebrews 4 the seventh day is still going on. Genesis says that “on the seventh day [God] rested” (Gen. 2:2), but He­brews informs us that God is still in that Sabbath rest unto which He entered after He created: “There remains, then, a Sabbath-rest for the people of God; for anyone who enters God’s rest also rests from his own work, just as God did from his” (Heb. 4:10).

V. Life Cannot Exist for Thousands of Years without Light

Argument: Young-earthers claim that according to Genesis 1, light was not made until the fourth day (1:14), but there was life on the third day (1:11-13). How­ever, life on earth cannot exist for millions (or even thousands) of years without light; thus, the “days” must not have been long periods of time.

Response: Light was not created on the fourth day, as defenders of the solar day argue; rather, it was made on the very first day when God said, “Let there be light” (Gen. 1:3). As to why there was light on the first day when the sun did not appear until the fourth day, there are various possibilities. Some scholars have noted a parallelism between the first three days (light, water, and land – all empty) and the second three days (light, water, and land – all filled with bodies). This may indicate a parallelism in which the first and fourth days cover the same period, in which case the sun existed from the beginning. Others have pointed out that while the sun was created on the first day, it did not appear until the fourth day. Perhaps this was due to a vapor cloud that allowed light through, but not the distinct shape of the heavenly bodies from which the light emanated.

Argument: Plants were created on the third day (1:11-13), and animals were not created until later (1:20-23). There is a symbiotic relation between plants and ani­mals, one depending on the other for its life. For example, plants give off oxygen and take in carbon dioxide, and animals do the reverse. Therefore, plants and animals must have been created closely together, not separated by long periods of time.

VII. The Old-Earth View Is an Accommodation to Evolution

Response: In response to this charge, it must be observed that allowing for long periods of time for the development of life came long before the idea of evolution. Augustine (354-430), for one, held to long periods of time for the development of life (City of God, 11.6). Also, even in modern times, scientists had concluded that long periods of time were involved before Darwin wrote in 1859. Furthermore, long periods of time do not help evolution, since without intelligent intervention, more time does not produce the specified complexity involved in life. Natural laws randomize, not specify. For example, dropping red, white, and blue bags of confetti from a plane at 1,000 feet in the air will never produce an American flag on the ground. Giving it more time to fall by dropping it at 10,000 feet will diffuse it even more.

VIII. Mark 10:6 Affirms That Adam and Eve Were Created at the Beginning

Argument: According to this text, “At the beginning of creation God ‘made them male and female.’” If God created humankind at the beginning of Creation, then they were not created at the end of millions of years, as the old-earth view contends.

Response: First, Adam was not created at the beginning but at the end of the creation period (on the sixth day), no matter how long or short the days were. Sec­ond, the Greek word for “create” (ktisis) can and sometimes does mean “institution” or “ordinance” (cf. 1 Peter 2:13). Since Jesus is speaking of the institution of mar­riage in Mark 10:6, it could mean “from the beginning of the institution of marriage.” Third, and finally, even if Mark 10:6 is speaking of the original creation events, it does not mean there could not have been a long period of time involved in those creative events.

Argument: According to the old-earth position, there was death before Adam. Nevertheless, the Bible declares that death came only after Adam as a result of his sin: “Just as sin entered the world through one man, and death through sin, and in this way death came to all men, because all sinned” (Rom. 5:12; cf. 8:20-22).

Response: There are several problems with this argument. First, Romans 5:12 does not say all animals die because of Adam’s sin, but only that “all men” die as a consequence. Second, Romans 8 does not say that animal death results from Adam’s sin, but only that the “creation was subjected to frustration” as a result of it(v. 20). Third, if Adam ate anything – and he had to eat in order to live – then at least plants had to die before he sinned. Fourth, and finally, the fossil evidence indicates animal death before human death, since people are found only on the top (later) strata, while animals are found in lower (earlier) strata.