The Ninth Commandment: Do Not Bear False Witness 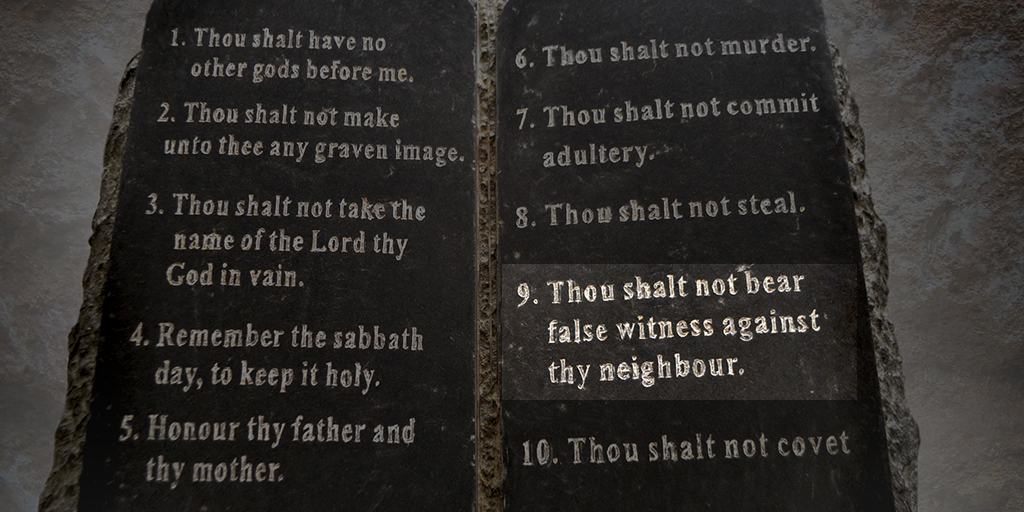 Put in more simple terms, this command warns us that we are not to lie. About anything; anywhere; anytime.

But let’s deal with what the Bible means when it speaks of giving false witness. Most immediately this refers to testifying falsely in a court of law. According to Old Testament law (which even carries over into our modern day), “One witness is not enough to convict anyone accused of any crime or offense they may have committed. A matter must be established by the testimony of two or three witnesses” (Deuteronomy 19:15).

Let’s say you wanted to get rid of someone you didn’t like for some reason (think of Jesus’ accusers during His trials). All you had to do was find at least two, preferably more, people who would come and tell the same story, and voila, problem solved. Right?

Wrong. This was considered such an egregious crime that if a person was discovered to have given false testimony, they were to receive the same penalty the accused person would have received if convicted—up to and including the death penalty.

God hates lies. He hates false witnesses. Proverbs 6:16-19 states: “There are six things the Lord hates, seven that are detestable to him: haughty eyes, a lying tongue, hands that shed innocent blood, a heart that devises wicked schemes, feet that are quick to rush into evil, a false witness who pours out lies and a person who stirs up conflict in the community.” Notice lying gets a double mention.

Further, the Bible addresses liars when He says, “You belong to your father, the devil, and you want to carry out your father’s desires. He was a murderer from the beginning, not holding to the truth, for there is no truth in him. When he lies, he speaks his native language, for he is a liar and the father of lies.” When you lie, you are doing the devil’s work.

So let’s consider for a moment what it means to obey this commandment. The Heidelberg Confession explains that the aim of this commandment is “that I never give false testimony against anyone, twist no one’s words, not gossip or slander, nor join in condemning anyone rashly or without a hearing. Rather, in court and everywhere else, I should avoid lying and deceit of every kind; these are the very devices the devil uses, and they would call down on me God’s intense wrath. I should love the truth, speak it candidly, and openly acknowledge it. And I should do what I can to guard and advance my neighbor’s good name” (emphasis added).

When you lie about something, when you twist someone’s words or take them out of context, when you gossip, when you slander, when you condemn someone without getting the whole story, you are breaking this commandment.

Let me get to meddling for a moment. The church prayer meeting is probably the most outrageous gossip session that has ever taken place. Oh, it’s couched in terms of “We need to pray for so-and-so. He/she did/said…. And he/she just needs lots of prayer!” Ever done that? God is not amused. Be assured of that.

D.L. Moody told of an 18th century woman named Hannah Moore who had an excellent response whenever someone gossiped to her. He related, “Whenever she was told anything derogatory about another, invariably her reply was, ‘Come, we will go and ask if it is true.’”[1]

Two more points. First, I quote from John Dickson and then J.I. Packer on why we feel compelled to lie. Do you find anything here that describes why you have lied?

John Dickson: “Think for a moment about why we lie in normal circumstances and what it says about us and about those we deceive. Most lies seem to be about deriving an invalid benefit for myself, perhaps to protect my honour, to maintain a boast, to avoid punishment, to win an argument, to rip someone off, and so on.”[2]

J.I. Packer: “Why do people lie to and about each other?… Partly from malice, partly from pride. When you lie [to put] someone down, it is malice; when you lie to impress, move, and use him, and to keep him from seeing you in a bad light, it is pride.”[3]

Finally, I want to deal briefly with the lies found in the Bible. There are a lot of them. Examples are: Potiphar’s wife who lied about Joseph attempting to rape her; Abram lying, or asking Sarai to lie about being his sister not his wife; the Hebrew midwives lied to save the lives of Hebrew children in Egypt; and Rahab who lied about the spies.

Remember first that the Bible is describing what happened, not condoning it. People lie, but God doesn’t. God has strongly commanded His people not to lie, but they still do. But there’s a question for some people about “justifiable” lies when it may, for example, save lives. Does God overlook the lie for the “greater good”? We turn to Dr. Walter Kaiser for the answer:

“[Rahab] said, ‘I don’t know which way they went.’ That was palpably false. Romans 3:8 warns us not to say, ‘Let us do evil that good may result.’ Neither should we argue, especially from a descriptive or a narrative passage, that a text validates deceit under certain conditions.

“The so-called dutiful lie ignores how precious the truth is in God’s sight. Even lies told for very good purposes are not free from divine disapproval. Moreover, even if in the de facto providence of God, Rahab’s untruth allowed the two spies to escape harm, this does not therefore justify such a method. God is not reduced to unholy acts to fulfill his will. At most God allowed his purposes to be fulfilled in this most unusual manner, because his grace can operate in spite of the sinful maneuverings of men and women. Untruth cannot be vindicated simply because it is closely tied to the total result.”[4]

When we lie to avoid possible harmful consequence, we rob God of the opportunity to act on our behalf. We rob ourselves of that clean, pure relationship we could have with Him based on truth.