What do Christians Believe about God and the Trinity? 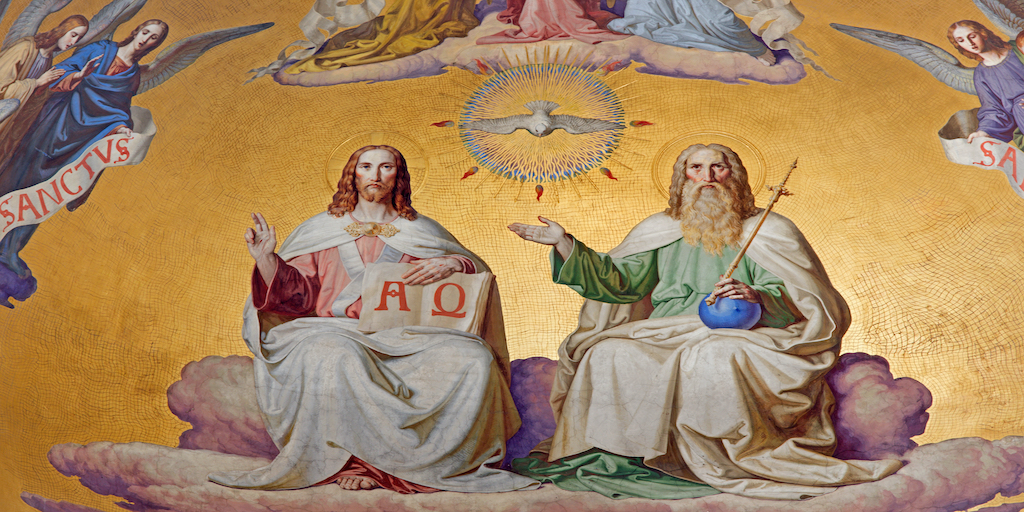 What do Christians Believe about God and the Trinity?

The living God is not what the new religions claim He is, as if only in the last century or so God had now chosen to reveal Himself “as He truly is” to this or that group or person. God is not some unknowable, impersonal divine essence, such that our own personalities ultimately become an illusion. Nor does “He” or “It” or “She” manifest through our alleged “higher consciousness” so that God and our true self are one. God is not the universe itself nor is the universe His body (pantheism, panentheism). God is not the originator of all religions (syncretism) or an eternally hidden deity who is perpetually unknowable, unapproachable and indescribable (mysticism). God is not unipersonal or monistic.

The Trinity is not a symbol of various religious, metaphysical or psychological concepts, nor is the Trinity tritheistic (three gods) or exist in three different modes or aspects (modalism). The doctrine of the Trinity was never derived from ancient pagan religions.[1] In fact, the only rational explanation of the Trinity is divine revela­tion.

Among all religions that have ever existed, the Christian concept of God is en­tirely unique, for in the totality of religious history, there is only one concept of an infinite-personal triune God. While every religion fits one of the preceding (or re­lated) descriptions, no other religion has a Trinity. Divine revelation accounts for our knowledge of the Trinity. Indeed, the biblical concept of the Trinity is at once so unexpected and complex, and yet so practical, that it could never have been in­vented by men in its biblical formula. For example, only the existence of the biblical Trinity logically explains the unity and diversity in creation. Only it explains both the human personality and the many triune manifestations in nature (man as body, soul, spirit; space as height, width, length; time as past, present, future; matter as energy, motion, phenomena; family as man, woman, offspring; and so on).[2]

In the following material we will document that the Bible teaches the doctrine of the Trinity and therefore no other concept of God. It is important to note here that the Bible teaches both monotheism and trinitarianism. It teaches a monotheistic view – that there is only one true God, and a trinitarian view – that this one true God exists eternally as three Persons. This “triunity” of God was defended from earliest times as Christian theologians and apologists carefully safeguarded both the unity of God against tritheism and maintained the respective deity of the three Persons of the Godhead. As Gregory of Nyssa stated in his letter to Ablabius, “To say that there are three gods is wicked. Not to bear witness to the deity of the Son and the Spirit is ungodly and absurd. Therefore one God must be confessed by us according to the witness of Scripture, ‘Hear Israel, the Lord your God is one Lord’ (Deut. 6:4), even if the word ‘deity’ extends through the holy trinity.”[3]

There Is Only One True God

The Bible does not teach any form of tritheism or polytheism, as in the Mormon faith, but that there is only one true God from all eternity. As Jesus taught: “Now this is eternal life: that they may know you, the only true God, and Jesus Christ, whom you have sent” (John 17:5).

God Is a Trinity or Triune

Simultaneously, this one true God has revealed that He is three Persons, or centers of consciousness, within one Godhead. Because the concept cannot be fully comprehended does not mean the doctrine is irrational or cannot be accurately defined. A good definition of the Trinity is provided by noted church historian Philip Schaff:

God is one in three persons or hypostases [distinct persons of the same nature], each person expressing the whole fullness of the Godhead, with all his attributes. The term persona is taken neither in the old sense of a mere personation or form of manifestation (prosopon, face, mask), nor in the modern sense of an independent, separate being or individual, but in a sense which lies between these two conceptions, and thus avoids Sabellianism on the one hand, and Tritheism on the other. [Sabellianism taught that God was one person only who existed in three different forms or manifestations; tritheism refers to a belief in three separate gods.] The divine persons are in one another, and form a perpetual intercommunication and motion within the divine essence. Each person has all the divine attributes which are inherent in the divine essence, but each has also a characteristic individuality or property, which is peculiar to the person, and can not be communicated; the Father is unbegotten, the Son begotten, the Holy Ghost is proceeding. In this Trinity there is no priority or posteriority of time, no superiority or inferiority of rank, but the three persons are co-eternal and coequal.[4]

This is important because if we are to worship God “in spirit and truth” (John 4:24), as Jesus commanded, we must know and worship the one true God as He really is. To fail to do this is to fail to know and worship God, and this cannot bring Him glory. Thus, those who reject the Trinity by definition deny the nature of God. Without a biblical theological formulation about God, heretical views arise. This in turn can lead to rejection of the one true God and the worship of a false God. And if the Bible is clear on anything, it is clear that faith in a false God cannot save people from their sins. Jesus Himself emphasized the importance of having an accurate knowledge of God when He said, “This is eternal life: that they may know you, the only true God, and Jesus Christ, whom you have sent” (John 17:3).

In his Christian Theology, Christian theologian Millard J. Erickson offers six points that must be included in a proper understanding of the doctrine of the Trinity (the following is the authors’ paraphrase of Erickson’s points):

Prior knowledge of the Trinity, especially in its theological formulation, is not necessary for a person to be saved. But once saved, it is vital for Christians to know the true nature of the God who has so graciously pardoned them. This explains why the Church has always recognized the importance of a proper understanding of God and maintained that those who reject the scriptural view of God, as long as they do so, cannot be saved. Consider Dr. Schaff’s comments about the Athanasian Creed:

[It] begins and ends with the solemn declaration that the catholic [universal] faith in the Trinity and the Incarnation is the indispensable condition of salvation, and that those who reject it will be lost forever. This anathema [divine curse], in its natural historical sense, is not merely a solemn warning against the great danger of heresy, nor, on the other hand, does it demand, as a condition of salvation, a full knowledge, and assent to, the logical statement of the doctrines set forth (this would condemn the great mass even of Christian believers); but it does mean to exclude from heaven all who reject the divine truth therein taught. It requires everyone who would be saved to believe in the only true and living God, Father, Son, and Holy Ghost, one in essence, three in persons, and in one Jesus Christ, very God and very man in one person.[6]

As Vladimir Lossky once put it boldly, “Between the Trinity and Hell there lies no other choice.”[7] Only personal bias or ignorance can explain cultic attempts to deny the biblical Trinity. It is significant that even some Unitarians who reject the Trinity still confess it is a biblical teaching based on “its obvious sense, its natural meaning” as found in Scripture. These words of George E. Ellis, a nineteenth-century Unitarian leader, illustrate the biases of anti-trinitarian groups and liberals who refuse to accept the Trinity on personal, not biblical, grounds. Ellis confesses, “Only that kind of ingenious, special, discriminative, and in candor I must add, forced treatment, which it receives from us liberals can make the book teach anything but Orthodoxy.”[8] No less an authority than the great Princeton theologian B. B. Warfield pointed out that the doctrine of the Trinity “is rather everywhere presupposed” in Scripture.[9] This is, for example, clearly demonstrated in Edward Bickersteth’s fine work, The Trinity.

Dr. Robert A. Morey’s The Trinity: Evidence and Issues (Grandville, MI: World Publ., 1996), is an extensive in-depth analysis of all the biblical, philosophical, and historical issues relating to the doctrine of the Trinity. He deals with epistemology, hermeneutics, heresy, orthodoxy, liberalism, feminism, the Jesus Seminar, Islam, the cults, the occult, early Jewish literature, the Dead Sea Scrolls and the Apostolic Fathers, and he brings to light new information on the history and origins of Arianism and Modalism. The chapter on the deity of Christ, “The Son of God in the New Testament,” is over 200 pages with 265-plus footnotes, often with multiple refer­ences in each note. And a brief, popular treatment can be found in our booklet Knowing the Truth About the Trinity.