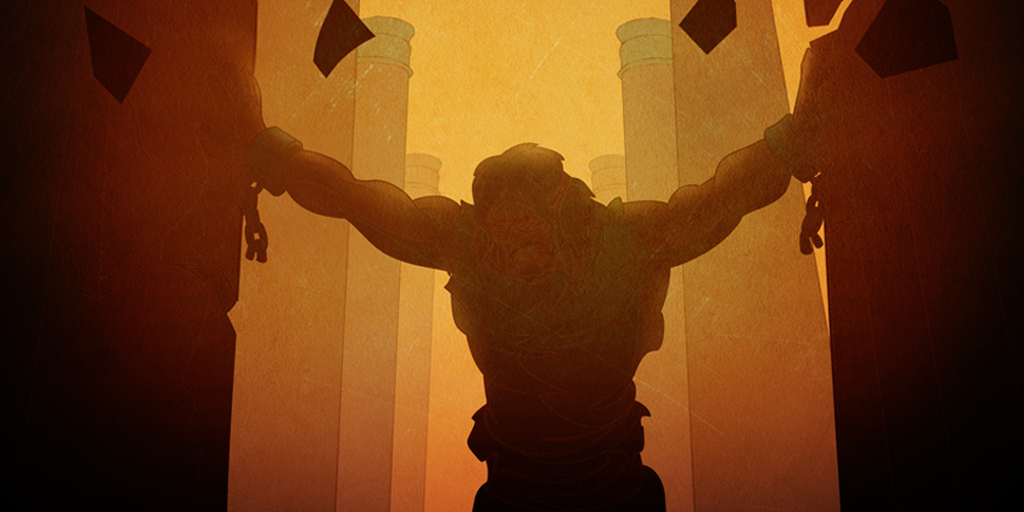 At Samson’s death, his final words were, “Let me die with the Philistines!” (Judges 16:30). He pushed down the pillars of the temple, killing himself and his enemies.

An important distinction in this account is that Samson did not take his life; he sacrificed his life. The Philistines were at war with the Israelites during this time. Samson was Israel’s leader, yet had been captured after Delilah discovered the source of his strength.

When captured, Samson was beaten and tortured, and had his eyes gouged out. Judges 16:22 share, “Then the Philistines seized him, gouged out his eyes and took him down to Gaza. Binding him with bronze shackles, they set him to grinding grain in the prison. But the hair on his head began to grow again after it had been shaved.”

The Philistines later brought Samson into the temple of Dagon to “entertain” them (Judges 16:25). Samson asked God for strength one more time to defeat his nation’s enemy. He realized it would also end his life, but was willing to sacrifice himself to help his people.

Some have argued Samson was also out for revenge. In Judges 16:29, he prayed, “Sovereign Lord, remember me. Please, God, strengthen me just once more, and let me with one blow get revenge on the Philistines for my two eyes.” Revenge was one motive (seen elsewhere with Samson), but his mission was much greater than revenge for his eyes. He sought to defeat Israel’s enemy.

In the New Testament, Hebrews 11 mentions the spiritual heroes of the Old Testament times. These include Samson (v. 32). His name is noted among those of whom we read “the world was not worthy of them” (v. 38).

Wrap Up on Did Samson Commit Suicide

Hebrews 11:39-40 add, “These were all commended for their faith, yet none of them received what had been promised, since God had planned something better for us so that only together with us would they be made perfect.” Samson’s life did not end with suicide, but by completing the mission God had given him as a leader of Israel who helped defeat their enemies.

His actions are also like what we read in John 15:13: “Greater love has no one than this: to lay down one’s life for one’s friends.” Samson did not give up on life. Samson gave up his life so others could live.

His actions also foreshadow the sacrifice of Jesus on the cross. Though innocent, Jesus gave His life for others. While we were yet sinners, Christ died for us (Romans 5:8). We are called to believe in Him and live for Him still today.

In crisis? Call 1-800-273-TALK (8255) or visit suicidepreventionlifeline.org. This page is not monitored 24/7 and is not intended for crisis intervention.