Mary, What Did You Know 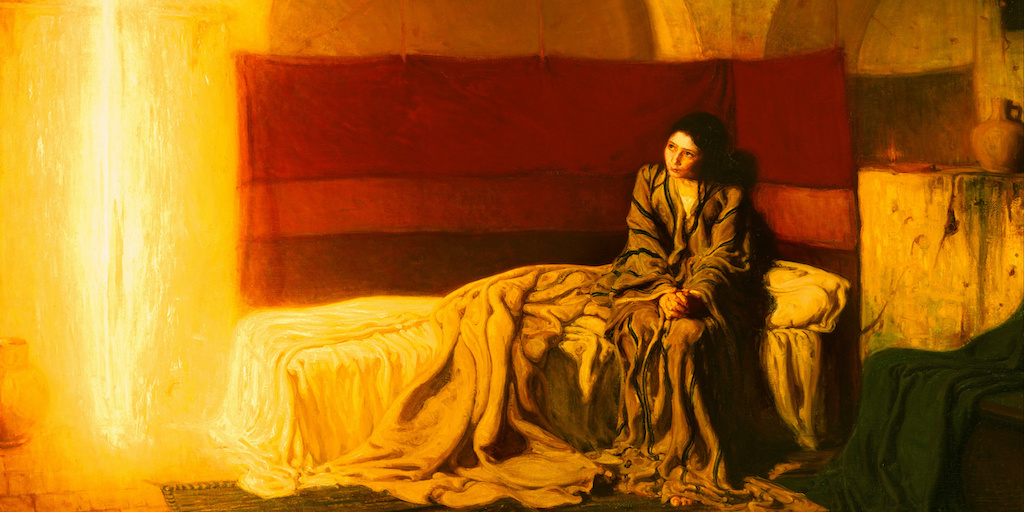 We just don’t know a lot about Mary, the young woman who would become the mother of Jesus. We assume from historical records that she was fairly young, perhaps 14 or 15 years old, since that was the age when most young girls became engaged.

We know, based on the sacrifice offered at Jesus’ birth that Mary and Joseph were not wealthy. We can infer from the angel’s greeting, “Greeting, favored woman,” that Mary was not a wild teenager, but rather that the Lord was with her (Luke 1:28).

However, even if Mary had, like many young girls of her time, secretly dreamed she might be the fulfillment of the prophecy in Isaiah 7:14, her hometown would have made such an honor highly unlikely! She knew the religious leaders of her day considered Galileans like herself as “unlettered country-people” with accents so bad that their “very patois was an offence.”[1] No, if the Messiah came in her generation, He would surely come to a noble family, a family acceptable to the religious leaders! Oh, Mary! Little did you know!

Because it was to Mary, an “unlettered country woman” that the angel appeared and said, “Do not be afraid, Mary, for you have found favor with God. Now listen: You will conceive and give birth to a son, and you will name him Jesus. He will be great and will be called the Son of the Most High, and the Lord God will give him the throne of his father David. He will reign over the house of Jacob forever, and his kingdom will have no end” (Luke 1:30-33).

Mary, did you understand? Of course not. How could you? Such thing had never been seen before or since. How could you conceive and give birth to a son when you “had not had sexual relations with a man” (Luke 1:34)? What did it mean that the Holy Spirit would “come upon” you? And, if your son would sit on the throne of King David, did the thought of one day being the queen mother living in a palace cross your mind?

Mary may not have understood, but she had faith, something that would be incredibly important to her in the years to come. “I am the Lord’s servant,… May it be done to me according to your word” (Luke 1:37).

Flash forward nine months. She had been impregnated by the Holy Spirit. Joseph had first planned to divorce her, then had married her after his own encounter with an angel. Rumors about the identity of the baby-daddy most likely made her life miserable in the small town. Perhaps having to leave Nazareth for Bethlehem for the census, even if it meant traveling while pregnant, would have been a relief for her. A chance to get away from the busybodies who had been all up in her business since her pregnancy first became obvious.

But, “While they were there, the time came for her to give birth. Then she gave birth to her firstborn son, and she wrapped him tightly in cloth and laid him in a manger, because there was no guest room available for them” (Luke 2:6-7).

What happened next must have been completely perplexing: shepherds arriving to see her newborn baby? Magi arriving with gifts of gold, frankincense and myrrh? A threat from the king that necessitated a midnight escape to Egypt?

It’s little wonder that Mary “treasured up all these things in her heart and meditated on them” (Luke 2:19). Had Joseph shared with her the angel’s message to him: “You are to name him Jesus, because he will save his people from their sins”? Did either of them understand what that would entail?

Mary, did any of this make sense to you?

We only get a few more brief glimpses of Mary over the next few years: bringing Jesus to the temple when He was 8 days old (Luke 2); going to Jerusalem with Jesus when He was 12—and losing Him in the crowd (Luke 2); asking Jesus to perform a miracle at the wedding in Cana (John 2);  coming with His brothers and sisters to attempt an intervention, thinking that “He is out of his mind” (Mark 3:21).

Then we see Mary standing at the foot of the cross watching her son die a terrible death. How did that fit with Gabriel’s message to her 30-some years before? Had she misunderstood or mis-remembered what she had been told?: “He will be great and will be called the Son of the Most High, and the Lord God will give him the throne of his father David. He will reign over the house of Jacob forever, and his kingdom will have no end” (Luke 2:32-33). And yet, here on a hill just outside Jerusalem, His life was coming to an end.

Now Mary is left alone to try to figure out what had gone wrong. It is possible that Jesus put Mary in John’s care (John 19:27-29)[2] because there was a serious rift in the family. Had Mary alienated her other children by continuing to support Jesus? We do know Jesus’ brothers (and perhaps sisters) did not believe in Him—until after the resurrection.

Ah, yes. The resurrection. Mary, what a shock that must have been! What were you thinking when you saw your Son alive after you had watched Him die? Did it bring back vivid memories of your encounter with an angel and the message the angel gave you? Did you remember that song you sang with Elizabeth when you visited her early in your pregnancy? What did you pray about while you were gathered there with the others (Acts 1:14)?

Mary, what did you know?

“My soul magnifies the Lord, and my spirit rejoices in God my Savior, because he has looked with favor on the humble condition of his servant. Surely, from now on all generations will call me blessed, because the Mighty One has done great things for me, and his name is holy. His mercy is from generation to generation on those who fear him. He has done a mighty deed with his arm; he has scattered the proud because of the thoughts of their hearts; he has toppled the mighty from their thrones and exalted the lowly. He has satisfied the hungry with good things and sent the rich away empty. He has helped his servant Israel, remembering his mercy to Abraham and his descendants forever, just as he spoke to our ancestors.” (Luke 1:45-55)