UFOs and the Occult Connection 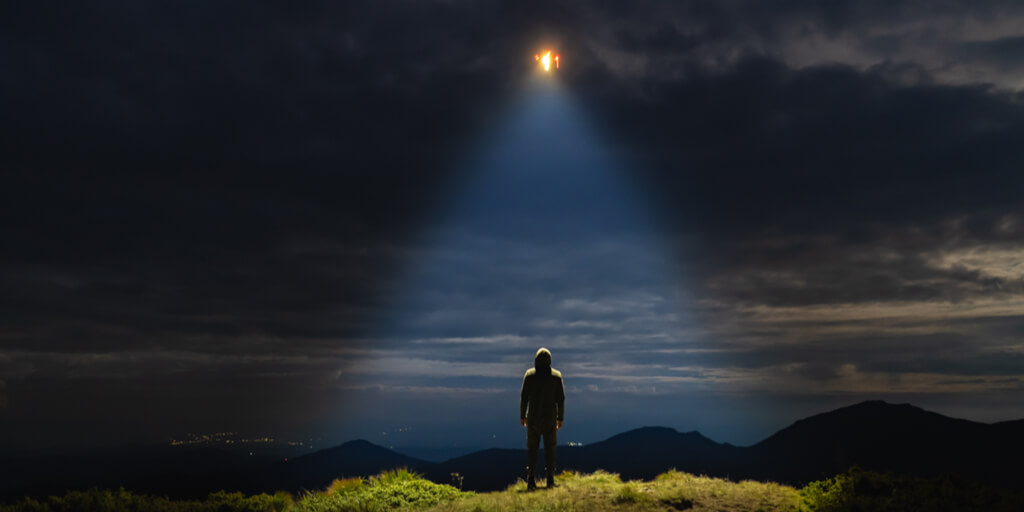 Many UFO sightings can be easily dismissed as mistakenly identified planets, rocket launchings, weather balloons, and various atmospheric phenomena. Sometimes, however, sightings cannot be so easily explained. Indeed, the Air Force’s Project Blue Book could not provide a rationale for 700 out of 12,600 cases of sightings between 1947 and 1969, when the project was abandoned.[1] Somewhere between five and ten percent of all UFO sightings remain truly unidentified.[2] Let’s look at UFOs and the Occult Connection.

Those who have thoroughly investigated the topic are aware of the strong connection between UFO phenomena and occultism. Christian researcher Brooks Alexander, of the Spiritual Counterfeits Project, notes that many of the reported cases of UFO contact “show some kind of occult involvement prior to initial UFO contact.”[3] Christian researcher John Weldon likewise notes that “UFO contactees often have a history of psychic abilities or an interest in the occult.”[4]

In many documented cases, those who successfully make “contact” with the “aliens” are those typically involved in one or more of the following: trance states, seances, clairvoyance, spiritism, automatic handwriting, peering into crystals, levitation, and out-of-body experiences.[5]

These terms may be unfamiliar to you. Here’s a brief synopsis:

God condemns these occultic practices (see Deuteronomy 18:10-12). All of them—either in isolation or taken together—can lead one into an encounter of some kind with a “UFO experience”—possibly even an “abduction.” These practices are spiritually hazardous and are strictly off-limits for the Christian.

Christian UFO investigator David Wimbish, who has engaged in significant research into the UFO phenomenon, has suggested that not only can the occult lead one to have a “UFO” encounter, but interest in UFOs can also actually draw one into the occult: “Many UFO investigators have followed a path that has taken them directly into the world of the occult. They believe they are rediscovering ancient spiritual truths and uncovering new realities about the universe. It’s more likely that they are getting involved with some ancient deceptions.”[12] Indeed, the UFO phenomenon “has led many to experiment with astral projection, to believe in reincarnation, and to get involved in other practices that directly oppose the historical teachings of the Christian church.”[13]

Jacques Vallee, a well-known (secular) French UFO researcher, says that “the very suggestion of such a link is disturbing to a scientist. However, the phenomena reported by [UFO] witnesses involve poltergeist effects, levitation, psychic control, healing, and out-of-body experiences.”[14] Vallee has personally investigated countless UFO sightings. His comments are based on years of firsthand observation. He concludes that “in recent years… the report of paranormal events in connection with close encounters with UFOs seems to have become the rule rather than the exception.”[15]

The occult connection to UFO phenomena is verified by the UFO reports that have come out of the former Soviet Union. In fact, because of all the UFO stories coming from that part of the world, Vallee decided to pay a visit and ended up writing a book entitled UFO Chronicles of the Soviet Union. Vallee discovered that cosmonauts, some of whom had reported UFO phenomena, are typically trained by parapsychologists and trained in Eastern meditation.[16] A parapsychologist is a person concerned with investigating the evidence for paranormal phenomena such as telepathy, clairvoyance, and psychokinesis (standard forms of occultism).

The Soviet host responded by saying: “We’re ahead of you in the study of the paranormal because the Western churches killed all your witches in the name of their dogma.… You only have yourselves to blame if you have fewer gifted psychics. You’ve eliminated their genes from the gene pool.”[18]

Erich von Daniken has written voluminously on alleged UFOs in the Bible. He claimed, for example, that the Ark of the Covenant was a radio transmitter used by Moses to communicate with aliens, and that a flying saucer guided the Israelites in the wilderness as a “pillar of fire” (see my separate article, “UFOs in the Bible”).

Von Daniken got his ideas from the occult in the same way other UFO advocates received messages from alleged “space brothers.” That is, he received paranormal information through telepathy from an unknown source as well as from out-of-body experiences.[19] Von Daniken remarked: “I know that astronauts visited the earth in ancient times… I was there when the astronauts arrived. Why should anybody believe I am able to leave my body whenever I desire and observe the past, present, and future all at the same time? Nonetheless, it is true. It has been true for many years.”[20]

This admission by von Daniken is significant. There is certainly no one more motivated than Satan and his demons to discredit Christianity by interjecting UFO theology into the Bible. I believe von Daniken’s occultic background made him easy prey to being manipulated by demonic spirits into promoting such theories. Satan is the real mastermind and inspiration behind the “UFOs-in-the-Bible” theory. And because of von Daniken’s vast literary success—no doubt also inspired by the powers of darkness—many people have ended up believing not in the miraculous God of the Bible but in aliens with incredible capabilities.

Many UFO groups in recent years have borrowed heavily from the Theosophical Society and spiritualism. Such groups often speak of cosmic masters of wisdom on other planets who psychically communicate through human beings through spiritism. Messages are typically received from these cosmic masters while the human being is in a trance state.[21]

The spiritist movement emerged in 1848 at the home of farmer John Fox in Hydesville, New York. It then received a massive shot in the arm from spiritualist Helena Petrovna Blavatsky, the founder of Theosophy, in 1875. Scholar Irving Hexham, commenting on the earliest UFO books to appear in the 1950s, said that “from the beginning, UFO stories were entangled with religious beliefs of theosophical origin supported by rich occult mythologies.”[22] In keeping with this, we read in The Gods Have Landed: New Religions from Other Worlds:

Most nineteenth- and early twentieth-century contact with extraterrestrials occurred in a spiritualist context, more likely than not in a seance. The prime mode of contact was a phenomenon quite familiar to psychic researchers, named “astral travel.” A person experiencing astral travel senses his/her body and consciousness separately, and while the body remains in one place, the consciousness travels around.[23]

These are common themes in the Theosophical Society. The term “Theosophy” literally means “divine wisdom.” Among the distinctive New Age ideas taught by Theosophy is the idea that “Ascended Masters” guide humanity’s spiritual evolution. Ascended Masters are thought to be formerly historical persons who have finished their earthly evolutions through reincarnation but are continuing their evolution on a higher plane of existence. Today, even as these Ascended Masters continue in their own evolutions toward the divine, they voluntarily help lesser-evolved human beings on earth to reach the Masters’ present level. These Masters allegedly give revelations to spiritually attuned human beings.

Though not widely publicized, Theosophy has taught over the years that certain of these “Masters” live on other planets. J. Gordon Melton explains:

Little recognized, and certainly not emphasized by either Blavatsky or modern theosophists, Blavatsky included among the hierarchy masters who dwelt on Venus and with whom she was in contact. These masters she termed the Lords of the Flame and the Lord of This World, the head of the hierarchy for humanity. Under these Venusian Lords are the Lords of the Seven Rays who have direct contact with human adepts such as Blavatsky.[24]

We can therefore make a strong case that the modern UFO movement, with its emphasis on contact with aliens through occultic means, had its beginnings back in 1875 when Blavatsky founded the Theosophical Society. The parallels between New Age “contactees” and typical occult theosophists are remarkable.

It may surprise some to discover that the famous German psychologist Carl Jung (1875-1961) wrote a book about UFOs entitled Flying Saucers: A Modern Myth of Things Seen in the Sky. Jung, who himself was involved in the occult, believed that when people saw UFOs, they were actually engaged in a psychic experience since physical evidence always seemed to be lacking for the UFO appearance. In other words, to the one beholding the UFO, the experience may seem vividly real—but there’s nothing there in a physical sense.[25] Consider Jung’s comments:

There are on record cases where one or more persons see something that physically is not there. For instance, I was once at a spiritualistic seance where four of the five people present saw an object like a moon floating above the abdomen of the medium. They showed me, the fifth person present, exactly where it was, and it was absolutely incomprehensible to them that I could see nothing of the sort.

I know three more cases where certain objects were seen in the clearest detail (in two of them by two persons and in the third by one person) and could afterwards be proved to be nonexistent. Two of these cases happened under my direct observation. Even people who are entirely compos mentis [mentally competent] and in full possession of their senses can sometimes see things that do not exist.

I do not know what the explanation is for such happenings… I mention these somewhat remote possibilities because, in such an unusual matter as the UFOs, one has to take every aspect into account.[26]

If there is anything we can learn from Jung’s experience, it is this: People who are presently involved in some form of occultism—whether it be clairvoyance, telepathy, out-of-body experiences, astrology, divination, tarot cards, or whatever else—may witness what they believe to be a UFO when in fact nothing is physically there. I find this highly relevant, given that there are countless people in our country who are involved in various forms of white-washed occultism.

When we keep in mind the scriptural fact that Satan can bring about counterfeit miracles, signs, and wonders (2 Thessalonians 2:9), I think a viable explanation of at least some UFO sightings that do not have a natural explanation may relate to occultism and the work of Satan.My friends, I close with the recognition that God condemns all forms of spiritism, channeling, and divination—which are the prime occultic tools of contact with the alleged “aliens.” Deuteronomy 18:10-12 is clear: “Let no one be found among you who… practices divination or sorcery, interprets omens, engages in witchcraft, or casts spells, or who is a medium or spiritist or who consults the dead. Anyone who does these things is detestable to the LORD…” Anyone who thus attempts to make contact with these so-called “aliens” using such occultic tools stands condemned by God.