Christmas Through the Eyes of the Shepherds 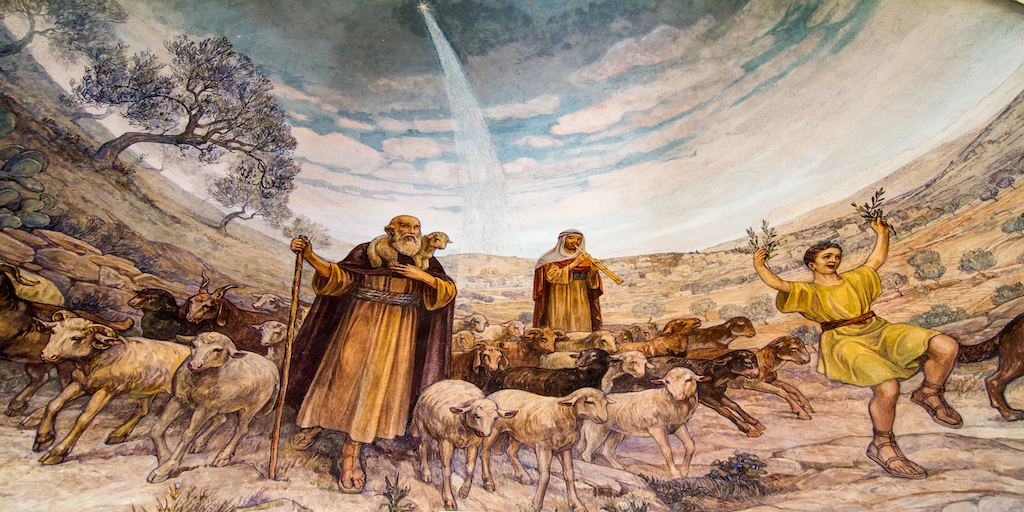 Imagine what it must have been like that night when the shepherds first heard of their Savior. When the darkness that surrounded them was overtaken by the radiance of God’s glory and the quietness of the night was met with a lifechanging message. It was a night when God led dirty shepherds to the spotless Lamb.

Christmas is about God drawing near. It is when we celebrate Him coming to dwell with us in the everyday elements of our world, meeting with us where we would least expect Him. It recalls how overlooked places like fields and stables with ordinary people like shepherds and peasants were transformed by God’s arrival.

But more than simply remembering events of old, the shepherds lead us to encounter God anew in our own lives as well.

Here are a few reflections based upon the shepherds’ first Christmas.

God Displays His Power and Glory through the Weak and Lowly

The shepherds were not a prestigious group. They were not known for their religious devotion, knowledge, or influence. They were lowly peasants. Commoners. No one would expect them to be the recipients of such a profound encounter with God’s glory, nor would anyone have picked them to be the bearers of this good news. Yet, God chose them.

And upon choosing them, God pointed these lowly shepherds to an even more lowly sign: “This will be a sign to you: You will find a baby wrapped in cloths and lying in a manger” (Luke 2:12). This is how they would identify their Savior: an immobilized newborn lying in a feeding trough – not the image one would expect of a savior. This sign wasn’t just about giving them directions; it did more than that. As Craig Keener puts it, “[prophetic signs] function as much to provoke and explain truth as to prove it.”[1] So as a sign, it also signified the nature of their Savior. He came to display God’s power and glory through meekness and humility. Though His glory was praised in the highest of heaven by a vast angelic army, He came to bring peace on earth by “[making] Himself nothing … taking the very nature of a servant” (Philippians 2:7).

During Christmas we celebrate God’s humility. Although the world hungers for more power, prestige, privilege, and possessions, our God delights in humility. He takes note of the overlooked. He recruits the unimpressive. As Paul writes, “God chose the foolish things of the world to shame the wise; God chose the weak things of the world to shame the strong; God chose the lowly things of this world and the despised things—and the things that are not—to nullify the things that are, so that no one may boast before him” (1 Corinthians 1:27-29).

We often assume God is looking for talent and wants to utilize our strengths. Rarely do we consider Him wanting to display His glory through our weakness. We often find ourselves striving for honor or fame, yet we follow our Lord and Savior who came into the world in a manger and left on a cross.

A Trustworthy Message – An Eager Response

After hearing the angel’s announcement, the shepherds’ response is notable: “The shepherds said to one another, ‘Let’s go straight to Bethlehem and see what has happened, which the Lord has made known to us.’ They hurried off . . .” (Luke 2:15-16).

It seems we are always in a hurry – scrambling to leave on time, maneuvering lanes of traffic, and analyzing the shortest line at the grocery store. But do we hurry to follow God’s Word and His promptings throughout the day? The shepherds set for us a great example. They hastily go straight to the place God specified.

And what did they find? Everything was “just as they had been told” (Luke 2:20).  God’s words were trustworthy and true. Their haste was warranted.

More than simply being true, God’s words left the shepherds bursting at the seams with praise and excitement. Luke closes the scene with them “glorifying and praising God for all the things they had seen and heard, which were just as they had been told” (Luke 2:20). This awe over God’s message spread beyond the shepherds: “all who heard it were amazed at what the shepherds said to them. But Mary treasured up all these things and pondered them in her heart” (Luke 2:18-19).

God’s words are not only accurate, they are amazing. They bring life and joy to those who receive them. They have a goodness worth treasuring and a depth worth pondering. They contain a message worth pursuing.

Too Good Not to Tell

This is why we cannot keep this good news to ourselves. It is simply too good. Luke tells us, “When [the shepherds] had seen [Jesus], they spread the word concerning what had been told them about this child” (Luke 2:17).  They couldn’t help but share the angel’s announcement: “I bring you good news that will cause great joy for all the people. Today in the town of David a Savior has been born to you; he is the Messiah, the Lord” (Luke 2:10-11).

As we have noted, the shepherds weren’t trained theologians or skilled orators. They were ordinary people who couldn’t help but share what they had heard and experienced.

This Christmas, do you grasp the great joy there is to experience through this good news? Are you letting your excitement about Jesus and the news of what He has done spill out onto those you are around?

As you reflect upon the shepherds’ experience, may God also instill in you a humble and responsive heart filled with such joy and excitement that you can’t help but share about the coming of our Savior with others.