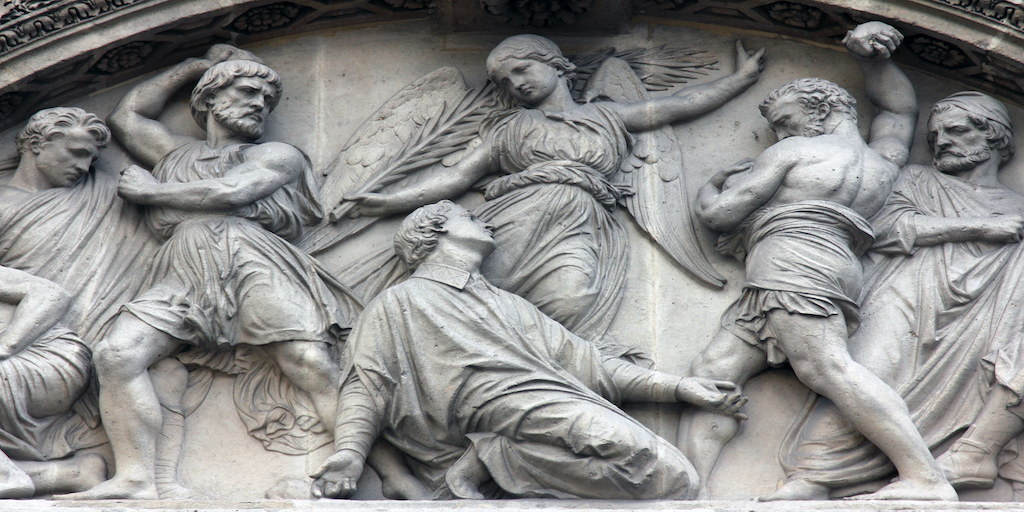 Mark Burnett and Roma Downey’s television series A.D. continued this week with episode 5 “The First Martyr.” We asked for your questions. The following are brief responses to top questions.

Find video clips related to this episode and additional resources at Exploring A.D.

Did Stephen really die as the first martyr like in A.D.?

Acts 6-7 mentions Stephen as one of the seven men chosen to care for the needs of widows in the first church. In addition, his speech in Acts 6-7 is the longest in the entire book, proclaiming the good news of Jesus as the Messiah to the Jewish religious leaders. Verse 57-58 describe his death as the first Christian martyr:

“At this they covered their ears and, yelling at the top of their voices, they all rushed at him, dragged him out of the city and began to stone him. Meanwhile, the witnesses laid their coats at the feet of a young man named Saul.”

Though little of Stephen’s actual speech was included in this television episode, the facts regarding his death as the first Christian martyr are true as recorded in Scripture, likely occurring within the first two years following the resurrection, perhaps within the first year.

What was the role of Philip in the Book of Acts?

In the A.D. series, Philip gathers needy people for Peter and other early followers of Jesus to help. This portrayal reflects the general character of Philip mentioned in Acts. Acts 6 noted Philip as one of the seven leaders (along with Stephen) chosen to care for the needs of widows.

In Acts 8:4-8, Philip was recorded as fleeing Jerusalem following Stephen’s death. He stopped in Samaria and preached Jesus there. His preaching was accompanied by miracles and power over evil spirits. Leading got “great joy in that city” (v. 8).

Verses 26-40 describe Philip evangelism to likely the first Ethiopian Christian. At the conclusion of this account, Philip baptized the man and quickly disappeared. His final mention in verse 40 notes, “Philip, however, appeared at Azotus and traveled about, preaching the gospel in all the towns until he reached Caesarea.”

Did the early Christians really live in a sort of base camp as portrayed in the A.D. series?

In episodes four and five of the A.D. series, the early Christians are shown as living in a sort of base camp outside of Jerusalem. How accurate is this description?

First, the end of Acts 2 notes the believers, “Were together and had everything in common” (v. 44). However, verse 46 notes, “Every day they continued to meet together in the temple courts. They broke bread in their homes and ate together with glad and sincere hearts.” They met daily in the temple courts in Jerusalem without fear during this time. In addition, no mention of camping is made. These early believers liking stayed with friends and family in homes in and around the city of Jerusalem just as people usually did during the Pentecost holiday. While the base camp idea is a creative one, it does not reflect the description found in the Book of Acts.

Was Peter beaten in Jerusalem in the early part of Acts?

Peter and John were arrested in Acts 3 after the healing of the disabled man. However, no mention was made of them being beaten. The early believers feared death following the killing of Stephen; with all but the apostles fleeing the city (Acts 8:2-3). However, Peter was not physically persecuted until Acts 12. During this time, James, the brother of John and an apostle, was killed. Peter was then arrested with plans to bring him out for public trial and death following the Passover.

Was there really a man named Boaz who sought to overthrow the Roman government in Jerusalem?

There is no mention of a man named Boaz in the New Testament who sought to overthrow the Roman government. The role of Boaz is the serve as an example of the kind of Zealots who lived during this time and sought to overthrow the government by force. In contrast, Jesus preached about a kingdom not of this world. His followers lived a way of love, peace, and non-violence. While these two worldviews are contrasted well in the series, the emphasis on violence in episode 5 is much greater than what was recorded in Acts.

Was there really a girl named Tamar in the New Testament?

The A.D. series portrays a young woman named Tamar among the new believers in Acts. She is connected with Peter’s daughter and seeks community and refuge among the early Christians. However, this is all extra narrative added to the television series. Neither the daughter of Peter nor a young girl named Tamar were historical characters mentioned in the Book of Acts.

For articles on the other episodes in this series, helpful videos, and other resources, visit Exploring A.D.